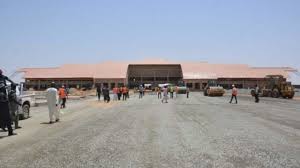 The Yobe State Government says it has over N18 billion on the construction of the Damaturu International Cargo Airport.

The state government added that it spent heavily on the construction between 2017 and 2021.

The intimation was made by t Alhaji Abdullahi Kukuwa, Yobe Commissioner for Transportation and Energy, during the weekend at a ministerial briefing on Gov. Mala Buni’s achievements recorded from 2019 to 2021.

He noted that the contract was initially awarded at N11 billion, but jumped  to over 18 billion as a result of variations.

Acccording to him, the airport would be ready for use as soon as the ministry took delivery of some runway lighting equipment.

He said, “The state had also expended over N4 billion on 70 rural electrification projects connecting over 12 villages across the state’s 17 local government areas.

“Within the period under review, the ministry also provided 180 units of solar street lights at the Don Etiebet Estate and the National Youth Service Corps camp at Dazigau.”

“The ministry had also upgraded a transformer sub-station at the College of Nursing, Damaturu, in addition to constructing high tension and low tension networks in Nguru, among others,” he said