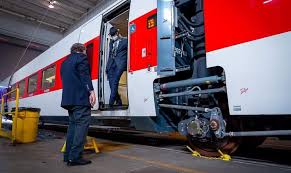 Lagos State Government has disclosed that the tickets of the intra-city trains would not be more than N250 per trip.

Speaking on the service which is expected to kick off by the last quarters of 2022, Lagos State Governor, Babajide Sanwo-Olu  said that the  newly acquired Talgo Intra-City Ten Coach metropolitan trains for the  project are in line with the intermodal transport plan of the state.

Sanwo-Olu said this on Friday while featuring on Channels Television’s ‘Sunrise Daily’ programme.

He added that line which  the 37 km Red Line will traverse eight stations and move passengers from Agbado through Oyingbo when completed.

The Governor also made it known that it would cost the state up to N150bn to complete the Red and Blue Lines.

He noted that the Investment is viable considering the fact that it would ensure r the movement of over 22 million Lagosians.

He said, “N200, N250, it (train ticket) probably won’t be more than that. The fare structure will be (determined by) where you are joining and taking off but typically it won’t be more than what you are running on your regular BRT (Bus Rapid Transit) today.

“For it to be accessible, affordability is really critical for people to want to make it a better option. You can say it is quicker, instead of you staying one hour on the road, it is going to take you 20 minutes.

“So, affordability is very critical. It is certainly not going to be in thousands, like using N5,000 on. A train journey, it is nothing close that, it is still going to be in the regular N200, that is what we are looking at