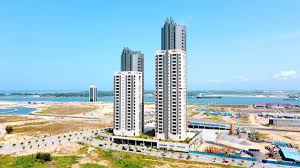 Situated at the Harbour Lights district of the city, the project, known as TM High Gardens, is having views of the Marina, port and waterways and consists of two-bedroom apartments as well as three-bedroom maisonettes ansd among amenities anticipated, are bar and lounge, gym, elevated pool and children’s play area.

Chief Executive Officer, Femi Beecroft, who stated this in Lagos, urged innovative construction solutions in the housing sector to make the accommodation more affordable for the masses, saying that there has to be a paradigm shift in the way homes are built in the country.

“Groundbreaking will take place in the first quarter of 2022, while project completion by Q4 2024. The maisonettes are the true definition of affordable luxury, considering the sizes of the homes and low prices, he said.

“Rather than the typical ‘flats’ concept, we have maisonettes, that is, ‘duplexes’. This gives the owners a sense of true luxury, especially when combined with the expansive balconies. This will be the first real affordable luxury in the city.

“At 250sqm, we have the largest three-bedroom units in the city. During the design stage, we focused on two things, making the designs family and pocket-friendly.

:”In choosing the location for High Gardens, we initially wrote off EAC as being too expensive and focused on Ikoyi. But after a site tour, I became convinced. The views of the Atlantic are second to none. It, however, takes a visionary to see what it could be”.

“The inspiration for the project is the beautiful and majestic high-rises of Dubai and New York. Once you go there, you cannot forget the experience and my dream, as a developer is to be able to replicate this back home in Nigeria. Even without marketing, the project is already 50per cent sold out and the three-bedroom units are almost completely gone”, Beecroft added.

Speaking on the payment structures for potential buyers, he explained that there is a four-year payment plan for those who take advantage within the fourth quarter of 2021. We typically request a 40per cent down-payment.