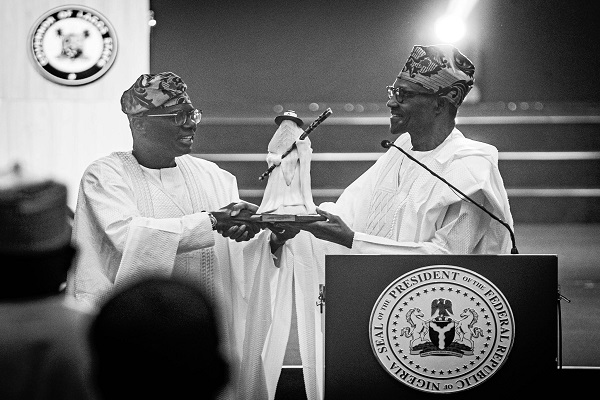 President Muhammadu Buhari on Tuesday commissioned the  13km first phase of the Blue Line, one of the six light rails under the Lagos Rail Mass Transit system.

Buhari also witnesses  the signing of the contract for the second phase of the project between the Lagos State Government and the contractor – Messrs China Civil Engineering Construction Corporation (CCECC), which would see the project extended to Okokomaiko, completing the remaining 14kms.

The President, led by Governor Babajide Sanwo-Olu; Deputy Governor Obafemi Hamzat; top government functionaries from the Presidency; members of the State’s Executive Council, and a college of traditional rulers among other eminent personalities, took a historic trip on the Blue Line, the first of such train, by any sub-national government in Africa.

President Buhari returned to the Marina Station in under 25 minutes.

Speaking on the inauguration, Governor Sanwo-Olu said he is excited at the official commissioning of the Blue Line, is the first of the Lagos Rail Mass Transit (LRMT) systems designed by the Lagos Metropolitan Area Transportation Authority (LAMATA).

The Governor said the project which is people focused would reduce travel time, improve the quality of life of the people, and improve the economy of the state, which is one of the most resilient megacities improving its capacity to compete with other megacities in the world.

He also assured that the government would commission the Red Line, which he described as “a bigger, better and longer rail line,” which shared the same corridor with the Nigerian Railway Corridor before the expiration of the tenure of the President.

The Governor said he is signing the second phase of the project with Messrs CCECC, in the presence of President in the demonstration that the government is committed to bringing the entire stretch of the blue line to completion.