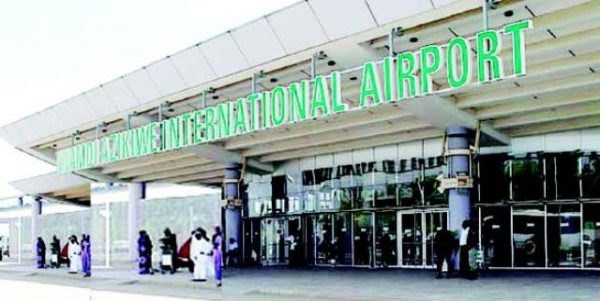 Operators at Nnamdi Azikiwe International Airport (NAIA), Abuja have reassured on safety of passengers and their belongings during the yuletide.

The operators, who spoke with newsmen in separate interviews, said the measure was imperative to ensure relative peace during festivities in order to sustain integrity of the airport.

NAIA Airport Manager, Mr Mahmud Sani, said the management had organised training for the staff in order to improve security at the airport.

“We at the Federal Airports Authority of Nigeria (FAAN) and airport operators, will ensure that our airports are safe to sustain being the best in safety in Africa in 2019.

“For almost a month, we have been having workshops with foreign instructors in order to make everything comfortable for our esteemed passengers during the yuletide.

“We have safety guidelines in place and we will follow it strictly. Our CCTVs are in place to trace any action at the airport,” he said.

Mr Samuel Wuyep, the Chairman, Air Transport Services Senior Staff Association (ATSSSAN), Abuja Chapter said everything was going on smoothly as airlines were being made to comply with rules and regulations.

“As far as I am concerned, the security is good, everything is moving smoothly, you can see, it is yuletide period, virtually, every airline is in compliance.

“We ensure that all the passengers are screened and every luggage they carry are properly screened. We have never had problem regarding security breach.

“So, I can assure you that everything is going on smoothly regarding security,” he said.

wuyep urged passengers to be law abiding and security conscious while their baggage were being searched.

“Earlier, the airport authority had organised meetings on how to handle the December rush through joint efforts.

“Apart from facilities at the airport, every airline has to make its own extra arrangement to make the whole process work as it is supposed to be,” he said.

He said Max air had increased its routs from 10 to 13 to cope with huge passengers taking flight in Abuja.

“Since Dec.10, we have started witnessing increase in passengers in all our routes, to cope with the situation, we have strategised by increasing our routes from 10 to 13.

“Also, we have recruited 28 staff to strengthen our workforce, by next year, people should start making their travelling arrangements earlier, like from October.

“This will make them go for cheaper tickets and getting prepared for the period,” he said.

Mr Adanguvegbe Kingsley, Assistant Chief Security Officer, Azman Airline, also said that efforts had been made to ensure safety at the airport during the yuletide.

According to him, the airline has not experienced cancellation of flight even with increasing number of passengers.

“FAAN has tried to beef up security in NAIA. It has also tried to improve infrastructure to cope with the increase in number of passengers during the yuletide.