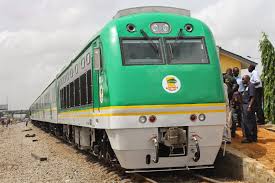 Passengers on a train travelling from Ibadan, Oyo State, to Lagos State, were reportedly stranded on Thursday when it ran out of fuel.

It was gathered that the train grounded to a halt around 11am.

A Twitter user, King Isaiah Obadare, who posted a video of the incident on his page, stated that crew members explained to them that the train stopped because it ran out of fuel.

He tweeted, “Boarded train from Ibadan to Lagos. We’re stuck in the forest with unknown Chinese men. They said fuel finished. What a beautiful country, Nigeria.”

Some pictures later posted by Obadare showed the crew members bringing fuel to refill the train.

In a follow-up tweet, Obadare, while showing a video where the train was being refuelled along the rail track, said, “Refuelling my country’s train.”

However, the Nigeria Railway Corporation denied that the train stopped over fuel shortage.

The spokesperson for the NRC, Mahmoud Yakubu, said it was a false narrative.

However, he failed to state why the train stopped along the rail track.