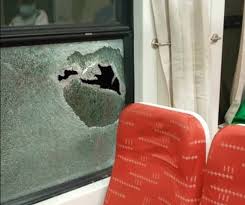 The Nigerian Railway Corporation (NRC) has cancelled its service on the Abuja-Kaduna rail line after it was reportedly attacked.

It was gathered that the  train was reportedly attacked with explosives by gunmen on two.Wednesday night and Thursday morning.

Response to the unfortunate incident, the NRC said it is suspending the service for the safety of travellers.

It added that it will inform the public when the train starts running again.

“Due to unforeseen circumstances, train services have been immediately suspended for the safety of our dear passengers,” information on the website read.

“Efforts are in place to restore service. Further information would follow immediately, the service is restored.”

Going by pictures on social media  the train was shattered and a portion of the track was blown away in the attack.

Reacting to the development, Shehu Sani, former senator representing Kaduna central, in a tweet said it “took a miracle” for him and other passengers on the train to escape.

“Yesterday, terrorists attacked the Kaduna Abuja railway with an explosive & opened fire on the train, targeting the Engine Driver and the Tank,” he tweeted.

“This morning, I was on board when our train ran over another explosive [and it] damaged [the] rail. It took a miracle for us to escape.”