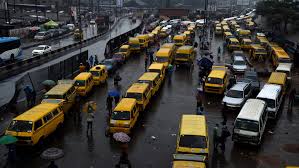 For a long time, transport unions have steadily increased their power and influence, being positioned in a strategic sector of the economy whose activities determine how we move goods around and also deliver services.

A major tragedy that has befallen the country is that road transportation is completely unregulated and the operators are left to do as they wish, mostly capriciously and in a sub-human manner.

It is in our country that a road transport worker — driver or bus conductor — will start work without having performed basic bodily hygiene, some half-dressed, while those that are dressed look so scruffy as to instill fears in their passengers, while shouting destinations in gruff, croaky voices that will scare the hell out of the faint-hearted, Vanguard reports.

Their insouciance is further manifested in a complete disregard for societal hygiene, as it is commonplace to see a driver park his vehicle, unzip his fly and pee on the road in open glare of whoever cares to be looking in his direction.

The vehicles they use in transporting fellow human beings are mostly battered, barely with lights, while the easiest way you can discern a commercial bus is its open door, even at high speed, with the rump of the conductor sticking out — dirty underwear and all. But all these do not bother those in charge of the transportation billet.

Because of who these people are and the way they operate, our motor parks, almost without exception, are black spots of crime. In the past few weeks, one of the many transport unions, the National Union of Road Transport Workers, NURTW, has consistently made the headlines due to one crisis or the other, especially in the Lagos State chapter of the union.

I need not bother you about the cause of the current crisis in the the NURTW; very often, these unions cross each other’s paths, which lead to skirmishes.

Many of such encounters had claimed lives in the past, and will claim more in the future. Don’t ask me why. What is at issue here is that while the national body of the union dissolved the Lagos State chapter, the Lagos State Government also announced suspension of all activities of the union in parks in the state.

Not done with that, the state government went further to constitute a parks management committee and made an interested party in the crisis the chairman. Only government and its officials believe the reasons forwarded as justification by the action, which has sent a very disturbing signal to the watching public.

One would expect that in dealing with matters concerning transport unions, the first step would be a recourse to the law for guidance on further action, for law and order is the superstructure on which a society like ours, aspiring for leadership and development in the comity of nations, rests. Is the law in abeyance here?

What does Decree 21 say about NURTW and its operations?The other bothersome issue is that the intervention by Lagos State Government amounts to wholesale meddling in the internal affairs of NURTW, and rather than solve problems, will only exacerbate the issues in contention, which triggered the crisis in the first instance. Back to basics: is the transport system, as currently operated in Lagos, of mega city standard? Can we continue to afford to leave operations of the transport system in the hands of roughnecks?

Where else do drivers or conductors beat up passengers, throw their luggage on the road, very often denying them change? Where else do passengers run after buses to secure seats? There is a transportation regulatory authority in Lagos — LAMATA (Lagos Metropolitan Areas Transport Authority).

Does it have any role in all of these, besides operating blue buses? I am of the bent that road transport operations in Nigeria is due for massive reforms that will have the interest of the commuting public at the fore, and thus provide another viable investment platform. Lagos State Government can do that, and set the pace for the rest of Nigeria as centre of excellence.