Home Transport New Lagos-Ibadan railway will be ready in May, NRC assures 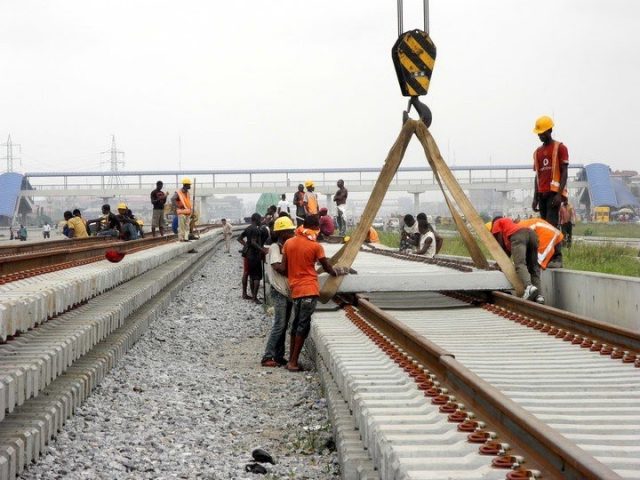 The 156-kilometre new Lagos-Ibadan railway will be ready in May this year, the Managing Director, Nigerian Railway Corporation, Mr Fidet Okheria, has said.

He also said commercial operation would commence on the 85km Iju-Abeokuta section of the new standard gauge line after the ongoing free train ride by passengers on the line expected to last for three months, Punch reports.

The Iju-Abeokuta section of the standard gauge new railway is currently operating a daily free train, which will last for three months.

This is after the Minister of Transportation, Mr Rotimi Amaechi, led several dignitaries including Governor Ibikunle Amosun of Ogun State and Alake of Egbaland, Oba Adedotun Gbadebo, on a train ride from Iju to Abeokuta on February 8 to signify the commitment of the Federal Government to the new railway project.

Okheria, who spoke on the telephone with Punch said appreciable progress had been recorded on the railway project.

“The entire stretch of the new line from Lagos to Ibadan would have been completed in May this year,” he added.

Responding to a question by our correspondent on what was left to be done, the NRC managing director said the contractor handling the project, China Civil Engineering and Construction Company, would need to lay rail track from Iju to Ebute Meta and extend it to the Lagos port.

He said the contractor had also done substantial work on the Ibadan-Abeokuta end of the project because it had approached the construction simultaneously from both the Lagos and Ibadan ends when the project started.

Okheria also said the CCECC was not expected to encounter much difficulty in the execution of the Lagos-Iju work having secured the cooperation of the Lagos State Government and other affected stakeholders and had jointly agreed on how to handle the various knotty issues.

About 30 coaches, including two sets of the diesel multiple unit, would be dedicated to the new line after the three months’ free train ride, the NRC boss said.

The Deputy Director, Public Relations at the NRC, Mr Yakubu Mahmoud, said the three-month free train period was also to enable the corporation to effectively determine the number of trains that would be run on the route when full commercial operation commenced.