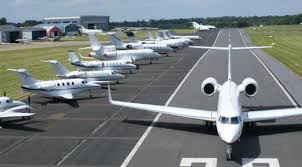 The Nigerian Civil Aviation Authority (NCAA) has said it has no record of a proposed international passenger airport located in Wasimi, Ewekoro Local Government Area of Ogun State.

NCAA Director General, Musa Nuhu, stated this when he appeared before the Senate Committee on Aviation on Tuesday.

He informed the panel that necessary approval was granted by the agency for the construction of the proposed Gateway Agro Cargo Airport in Ilishan-Remo, Ikenne Local Government Area of the state – off the busy Sagamu-Ijebu Ode Express Road.

This comes on the heels of disagreement between the state governor, Dapo Abiodun and his predecessor, currently a senator, Ibikunle Amosun, regarding which of the airports should be prioritised.

While the former is pushing for the construction of an airport in Sagamu, the latter would rather have one in Wasimi constructed.

The controversy started when the committee visited the sites of the two proposed airports with both men trying to convince members of the panel to ensure that their preferred projects are included in the federal budget.

The Sagamu airport which was conceived to support the state’s agricultural production, was initiated by the former governor, Gbenga Daniel in 2007.

He had commenced work on the airport but did not complete it. After assuming office, his predecessor, Amosun, initiated a different project, an international airport located in Wasimi.

But the NCAA boss said the agency had no record on the Wasimi project fow which N2 billion was said to have been approved for its take off in the 2021 budget.

He said. “I have seen an approval from the Ministry of Aviation for the Wasimi project. But in my records or in the NCAA, I don’t have anything.

“It is not in our purview to determine for a state or any entity the number of airports they want to have. All we will do is to ensure that any airport built must comply with our regulatory requirements. That is our function.”

The Chairman of the Senate panel, Smart Adeyemi, said the Ogun State Government had capacity to manage two airports.

A senator from Ogun State and member of the committee, Tolu Odebiyi, said the NCAA was part of the project and the necessary approval was sought and given for Wasimi. He said it impossible to put the agency in the dark about the project.

The senate committee agreed that Ogun State has the capacity to run both cargo and passengers airports and will submit a report to the Senate to that regard.. Shipsandports reports.