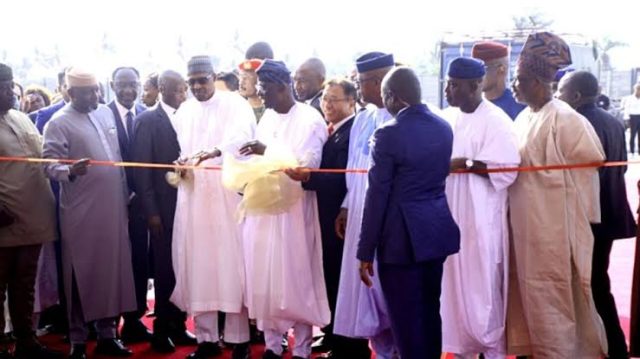 President Muhammadu Buhari has stated that the $1.5B Lekki Deep Sea Port is in line with his administration’s Economic Recovery Growth Plan (ERGP),.

He said that  he is ever-ready to lend his support to game-changing infrastructure projects that can impact positively on trade and commerce in the country.

President Buhari made this remark  in Lagos after he inaugurated the Lekki Deep Sea Port, the largest in Nigeria and sub-Saharan Africa.

The President in the company of his entourage, took a brief tour of facilities in the project. Governor Sanwo-Olu described the Sea Port as a total combination of the efforts of the Federal Government, Lagos State Government and the private sector,

He said: “The project is a total combination of efforts of the Federal Government, Lagos State and the private sector, and we are happy that this is happening in your time. It all started within your time and it has been completed within your time. The size of vessels that will be coming here could be up to four times the size of vessels that currently berth at both Tin Can and Apapa Ports. So, it is a massive infrastructure and we are excited that something fresh has been impacted into this country, and it is going to generate thousands and thousands jobs directly and hundreds of thousands of jobs indirectly in the entire ecosystem. This is your own project and we are excited.”

The Governor said the construction of the port was completed in record time, despite the slowdown in the pace of work occasioned by the Coronavirus pandemic. He said speed and consistency of construction testified to the determination of all the partners to deliver project.

He said: “The last Sea Port construction in Lagos took place in the late 1970s, when Tin Can Island Port was built to relieve Apapa Port. Now, with the support of President Buhari, federal authorities and the investment of the private sector, we are home to the newest Sea Port in the world, and the first Deep Sea Port in Nigeria. The economy of Lagos and Nigeria will be massively transformed by this investment, with enormous benefits in terms of direct and indirect jobs creation in their thousands, tens of billions of dollars in government revenues, reduced shipping and logistics costs, trade facilitation, and many other benefits.”

According to the state government, the vision conceptualised decades ago by Lagos State Government has been nurtured to a reality, with the construction and completion of a new Deep Seaport in Lagos Free Trade Zone (FTZ), Ibeju Lekki, by the State Government in collaboration with Nigerian Ports Authority (NPA) and a group of private investors. The development underscores another triumph of Public-Private Partnership (PPP), a possibility the state government started exploring for infrastructure delivery since early 2000s. The transportation infrastructure would give a major boost to the economy, by expanding the nation’s maritime capacity and paving way for the decongestion efforts at the existing Apapa and Tin Can Island ports.