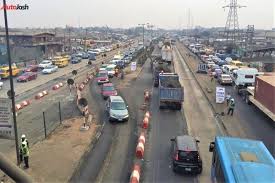 In order to  allow reconstruction work on the Ketu/Mile 12 section of the Lagos/Ikorodu road go on seamlessly, the Lagos State Government has said traffic will be diverted from the Ojota underpass to Demurin junction on the Ikorodu corridor,

The diversion will last for four weeks, starting from today.

A statement by the Commissioner for Transportation, Dr. Frederic Oladeinde, said the diversion is to allow the contractor begin work on the service lane inward Ikorodu from Ojota underpass to Demurin junction.

Acccording to him,  access routes to Ketu will be shut during the repair.

The commissioner said alternative routes have been provided, while the personnel of the Lagos State Traffic Management Authority (LASTMA) will be on ground to direct traffic.

He said motorists from Iyana Oworonshoki axis inward Ketu, Mile 12 and Ikorodu will be diverted to Alapere to exit through Ajelogo street and Mile 12 under bridge, or alternately use the clover leaf ramp to descend into the Maryland bound lane to access the ramp back to the bridge and take another descent into the Ketu bound main carriageway.

Oladeinde said traffic heading towards Ketu, Mile12 and Ikorodu from Maryland/Ojota axis will be able to access the main carriageway inward Ikorodu, while vehicles heading for the Lagos/Ibadan expressway will equally have the exit ramp open to access their desired destinations.

Motorists can also use the exit ramp and make a U-turn at 7UP to use the second exit on Ojota bridge.

Traffic will be diverted from the main carriageway inbound Anthony starting from May 3. The diversion will last for four weeks.

He said the diversion was necessary to address the worsening state of the access road at the Independence Tunnel, Maryland.

The commissioner advised motorists coming from Ibadan-Lagos expressway to go through Oworonshoki to connect Gbagada and descend the ramp at Anthony to access Ikorodu road during the repair.

He said the recently improved Maryland junction will also be opened temporarily during the construction to accommodate traffic coming from the Ojota axis and Ikorodu.