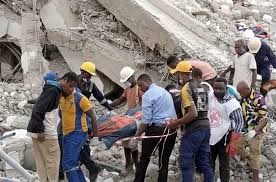 This committee was constituted this after the Governor received the report of the Panel of Inquiry on the cause of the structure to collapse on Nov. 1, 2021.

He added that setting up of the committee was a first step towards implementation of the report submitted by the panel.

Other members of the cpmmittee include the Head of Service, Mr Hakeem Muri-Okunola, the Commissioner for Justice, Mr Moyosore Onigbanjo (SAN) and his Agriculture counterpart, Ms Abisola Olusanya.

While commending the members of the Toyin Ayinde-led panel for their commitment and quick response to the assignment given to them by the state government, the governor said the new committee will bring forward a report to be considered by the Lagos State Executive.

”Let me on behalf of the people and the government of Lagos State first acknowledge the very difficult task that has been passed on to you and the commitments and the quick response that each and every one of you gave to the assignment.

”We know that you all have been chosen from different professional backgrounds but you were indeed ready to serve the people for this very important assignment.

”Let me therefore, commend and thank you for that exercise. I will be constituting a four-man committee almost immediately that will read through the report and I am giving them the end of next week to get back to the State Executive Council”, Sanwo-Olu said.