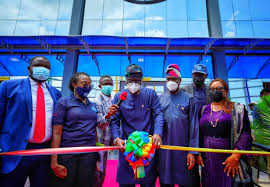 The bus stop is designed in such a way that it  is one of the four bus termini the Lagos State Government embarked upon in 2017 with the objective of providing quality bus infrastructure that will support government’s bus reform initiative. The bus termini projects are geared towards the provision of safe and quality public transport infrastructure that is comfortable and reliable.

The Mafoluku Bus Terminal is meant to serve Mafoluku, Oshodi, Ajao Estate environs, providing bus connections primarily to the Oshodi Transport Interchange and the Ikeja Bus Terminal and other parts of the State.

Commuters in this environs who would otherwise have to go as far as the Ikeja Bus Terminal or the Oshodi Transport Interchange to have access to reliable, affordable and available bus transport services, would now have best-in-class transport services available at their doorsteps.

The terminal will also provide a means of connection to the Murtala Muhammed International Airport and the Domestic wing of the Airport.

The Mafoluku Terminal has the following facilities for commuters including: