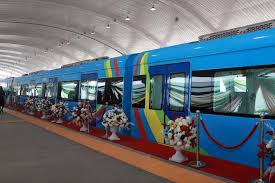 The LRMT Blue Line is a 27-kilometre rail system from Marina to Okokomaiko, with the construction divided into phases for ease of implementation and is expected to move more than 500,000 passengers when fully completed.

The project is being handled by the management of the Lagos Metropolitan Area Transport Authority, (LAMATA).

The completion of the infrastructure, which is one of the six rail lines and monorail prescribed for Lagos in the state’s Strategic Transport Master Plan (STMP), is in fulfilment of the promise made by Governor Sanwo-Olu to complete the project in the last quarter of 2022, ahead of the commencement of passenger operations slated for the first quarter of 2023.

The rail system would be powered by electricity from an independent power plant to be purposely built for its operation.

Speaking at the event, held at National Art Theatre, Igamu, Apapa, Governor Sanwo-Olu, who recalled the 1902 tramp that connected Lagos Island to Mainland, commended the former Governor of the state and the All Progressives Congress (APC) Presidential Candidate, Asiwaju Bola Ahmed Tinubu, for being a designer of modern Lagos.

The governor assured that the Blue Line infrastructural project would be fully completed by the end of 2023, just as he also promised to deliver the Red Line by May 2023.

He commended residents for their support and cooperation during the implementation of the project, adding: “This is a strong testimony of bequeathing a legacy.”

Earlier, the Managing Director of LAMATA, Engr. Abimbola Akinajo stressed that “the completion of the infrastructure for the first phase of the LRMT Blue Line is a testimonial of the importance of public transportation to Governor Sanwo-Olu’s THEMES agenda.

“This is substantial completion of civil infrastructure for the first phase of Lagos Rail Mass Transit, LRMT, Blue Line rail. This is the manifestation of the audacious mind and the spirit of courage of Mr Governor, Mr Babajide Olusola Sanwo-Olu and his team in the State Executive Council,” Akinajo.