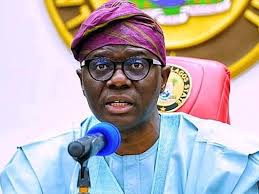 Lagos State Governor, Babajide Sanwo-Olu has commissioned a 480-unit housing project in the Ikorodu division, in a move to bridge the housing deficit and create affordable accommodation for residents,

The Governor named the Lagos HOMS project which he described as “a modern style” accommodation initiated to improve residents’ comfort and wellbeing and built in Ibeshe, after the late former President of the Nigerian Bar Association (NBA) and Asiwaju of Ikorodu, Chief Babatunde Olusola Benson, SAN.

While reiterating his administration’s commitment to prioritizing the development of housing projects that would enhance comfort and strengthen the aesthetic of the environment, Sanwo-Olu said the event was a testimony to the fulfillment of his electoral pledges.

Having performed the groundbreaking of Ibeshe Scheme II, he added that his administration had created 17,000 direct jobs and 18,000 indirect jobs through the construction of various housing schemes. He also stated that the state’s housing projects had the direct engagement of consultants, contractors and artisans in the state.

“In the past two and half years, we have been earnestly addressing the huge housing deficit in Lagos, the governor said.

“There is no doubt that this administration is passionate about building decent and durable homes for our people. Actually, the provision of more housing facilities is a major aspect in our transformational agenda tagged THEMES.

“Through our development blueprint, the state is focusing on the built sector as a driving factor for economic development, social inclusion and job creation. In deepening our activities in this sector, the economy of the state has been greatly revitalised. This is because building homes is a capital-intensive activity that positively affects every sector of the economy.

“We are here because every responsive government knows about the impact of good and decent homes on the welfare of the people. This has a ripple effect on other areas of life by adding meaning and essence to living. It is in acknowledgment of this fact that this administration considers housing development to be a priority on its agenda”.