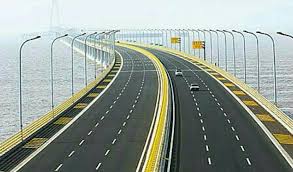 The proposed Fourth Mainland Bridge project will cost $2.5 billion and will be ready in 2027.

Special Adviser to the Governor on Public Private Partnerships, Ope George, and his counterpart in the Ministry of Works and Infrastructure, Mrs. Aramide Adeyoye, addressed reporters yesterday in Alausa, Ikeja.

According to them, the official turning of sod will be done by Governor Bababjide Sanwo-Olu in the first quarter of 2023.

The government, through the Office of Public Private Partnerships, on Thursday announced Messrs CCECC-CRCCIG Consortium as the preferred bidder for the construction of the bridge.

Eight roads– Lagos/Ibadan Expressway, Lagos/Abuja highway, Benin/Sagamu, and Igbogbo/Lagos would be aligned with the bridge, which would be delivered through a Public-Private Partnership Initiative and tolled for two years.

According to George, the project will also comprise the construction and operation of a greenfield tolled road and bridge with a design speed of 120 kilometre per hour, including the development of adjacent real estates.

He added: “Lagos State began a bidding process for the selection of a concessionaire, by the issuance of the Request for Expressions of Interest (REOI) on November 27, 2019, with 52 responses received and 32 being responsive.

“Subsequently, a Request for Quotation (RFQ) was issued on February 10, 2020 to the 32 eligible applicants, and 15 responses were received on April 15, 2020. Upon evaluation, six bidders met the criteria to progress to the Request for Proposal (RfP) stage.”

Adeyoye added that the bridge will reduce congestion on the existing Carter, Eko and Third Mainland bridges, while opening new areas of the city for future developments.

She said the state had carried along the over 48 estates, traditional rulers and others that would be affected by the bridge.

According to her, the negative impact of the bridge was minimal compared to the advantages, and so urged residents to be patient and cooperate with the contractor.