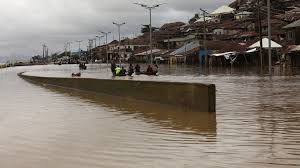 The Federal Government has revealed that 154 locations with transport infrastructure worth N80 billion have been impared or damaged by floods, which have claimed 612 lives, 1.4 million displaced and thousands of properties worth billions destroyed.

He claimed it was the responsibility of states and local governments to do that.

“You see, first of all, let us be clear, this is not in Nigerian, unique problem. We see this all over the world. It’s a human issue. At least let us dimension that whether it was in Pakistan, Florida, this early warnings were issued. Some people left, some people didn’t leave. There are human issues.

“So, let’s just understand, first of all, it’s a human issue and let us not situate it as a Nigerian problem. Now, also realise that there are levels of government involved here. There is a Federal Government, there is a state government, there are 36 of them. And there are 774, local governments, those places relating to who builds where, who sets up the house, of course, are local planning issues that are not the responsibility of the Federal Government.”

Minister of Water Resources, Adamu, noted that it would take 30 years of consistent investment to control the menace.

He affirmed that nobody can stop the phenomenon in the country.

He noted that government can only minimise the impact of the occurrence.