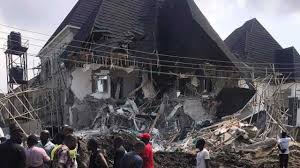 Residents and property owners on 9th Avenue, FESTAC Town, have lamented the demolition of illegal structures in the area.

The residents reporetdly besieged the office of the Federal Housing Authority (FHA) in Lagos on Monday to beg for mercy.

The residents numbering about 50 gathered in front of the FHA office on 202 Road, FESTAC Town.

The FHA had issued several stop-work orders and demolition notices to encroachers who did not have requisite documents or building approvals, the last of which lapsed on Sept. 13.

On Nov. 26, the FHA announced it was set to begin the demolition of illegal structures across FESTAC Town and would carry out the exercise on 7th and 9th Avenues, and later extend it to 11th Avenue.

Despite the stop work orders and demolition notices, the encroachers continued building until the FHA began the demolition exercise on Nov. 28.

A representative of a demolished hotel, at Stone Water Estate, 9th Avenue, Mr Gbade Oyelami, urged the FHA to put measures in place to avert additional demolitions pending when a compromise was reached.

They chorused in agreement that they erred in the process of land acquisition due to ignorance and misinformation from the land grabbers popularly refered to as ‘Omo Oniles.’

The Zonal Manager, South West, FHA, Mr Akintola Olagbemiro, who addressed the crowd, said the management was pained by their losses.

Olagbemiro said it was important for things to be done the right way to safeguard the public, residents and infrastructure.