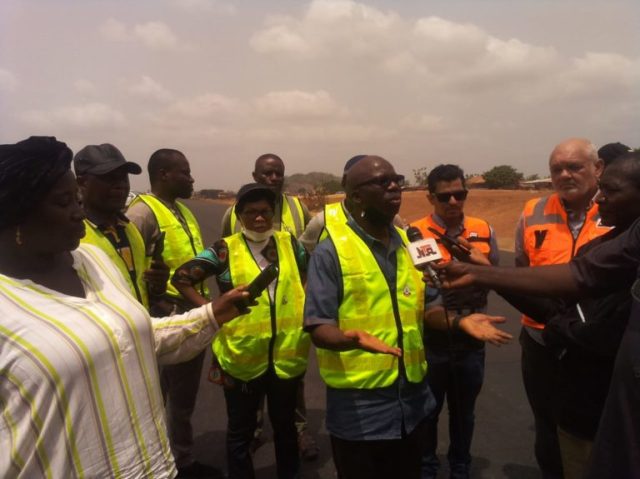 The Southwest Zonal Director of Highways, under the Federal Ministry of Works, Mr. Adedamola Kuti has assured Nigerians that the ongoing road network in the zone will boost the economic development of the region and the country at large when completed.

Kuti who was on the spot assessment of the ongoing construction of the Ibadan-Ife-Ilesa 180km road on Thursday maintained that the Federal Government’s giant strides in the construction of good road networks across the country will improve commerce and facilitate growth and national development.

He also urged the commuters plying the road to abide by the rules and regulations of the Federal Road Safety Corps while plying the ongoing construction portion of the road, he noted that there is a need for them to be more cautious while on such road plying, as there are series of diversion points on the road because of the ongoing work on it.

Kuti who was accompanied by Oyo State Federal Controller of Works, Mr. Kayode Ibrahim also visited the ongoing Oyo-Ogbomosho-Ilorin road project to assess the level of work done so far, maintained that when finally completed, the road would reduce the time limit of commuters travelling within the axis.

He also said that the 180km Ibadan-Ife-Ilesha dual carriage road was awarded by the Federal Government in 2020, maintaining that the construction of the project which was initially put on hold as a result of the outbreak of the COVID 19 pandemic.

He stressed that the road is now undergoing complete rehabilitation from the Iwo road area of Ibadan spreading to Ile-Ife and terminating at Ilesa.

Speaking further about the importance of the 52km Oyo-Ogbomoso-Ilorin road, Kuti said the road when completed will further improve the bond between the North and the South.

Kuti while briefing journalists about the importance of the multi-billion naira road project embarked upon by the Federal Government across the region said,”these roads are link roads, Ibadan-Ife-Ilesa links Abuja, just like the ongoing construction of Oyo-Ogbomoso-Ilorin which also link northern states so you can see that these roads are very crucial to us, and I’m very sure it will improve the commercial activities of the zones and the country at large.”

The Project Manager of the company handling the Ibadan-Ife-Ilesa project, Mr. Pascal Harfouch said the scope of work on the road is top-notch and he promised to deliver an excellent job at the end of the project, he also maintained that there is nothing that will stop the spate of work at the site as they have been fully mobilized by the Federal Government.

The Oyo State Federal Controller of Works, Mr. Kayode also expressed satisfaction of the level of work done so far on the roads visited, he also opined that the road when completed will be of great benefit to Nigerians.

The project manager of the ongoing Oyo-Ogbomoso-Ilorin road, Mr. Jacob Israel also confirmed that the road is at 50% completion, promised that by the end of the year 2023 the road will be ready for commissioning.