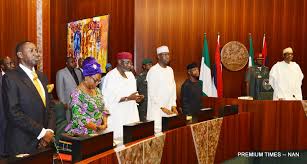 The Federal Executive Council has approved the variation in the sum of the contract for East-West road project sections 1-4 from Warri to Port Harcourt, Eket, Oron, by N260 billion, bringing the total amount required for it to N506 billion.

The original cost for the sections was about N246 billion.

The variation was part of the decisions reached by the council presided over by Vice President, Yemi Osinbajo, at the Presidential Villa, Abuja, on Wednesday.

The council approved another N140 billion worth of contracts for the rehabilitation, construction and reconstruction of some other roads in different parts of the country.

According to the spokesman of the Vice President, Laolu Akande, who briefed correspondents on the issue, the variation followed a memorandum presented to the council by the Minister of Works and Housing, Babatunde Fashola, as part of efforts to provide succour and resolve issues around the recent floods.

The presidential aide said, “He got approval for the variation order in respect of repair works on the East-West road project affected during the recent flooding occurrences in the Niger Delta.

“So, the approval was for a variation order for the East-West road project sections 1-4 from Warri to Port Harcourt, Eket, Oron, including Oron-Eket bypass in the sum of N260 billion, thereby increasing the total contract sum for the outstanding sections 1-4 of the East West road projects from the sum of formerly of N246 billion now to N506 billion. The memo was approved.”

Fashola also got FEC’s nod for the award of contracts for the urgent repairs and special general maintenance of some roads nationwide.

Approval was also given for the urgent repairs and the reconstruction of Water Cooperation Drive at Trinity Avenue, Victoria Island, Lagos State, in the sum of N2 bn with a completion period of 36 months.

Similarly, approval was given for the award of contract for the dualisation and reconstruction of the Kano-Kwanar-Ganja-Hadejia road in Kano and Jigawa states in the sum of N94bn, inclusive of 7.5 percent VAT, with a completion period of 24 months.

Also speaking on the memorandum approved for his ministry, the Minister of Agriculture, Mohammed Mahmood, allayed fears of food shortage in the country due to the recent ravaging floods.

He said arrangements were in place to intensify dry season farming in the country to make up for the loss of production in flood affected places and other areas that had become inaccessible due to insecurity.

Asked how food shortage could be averted, he explained: “Number one, we have in place an intensive plan for dry season farming. We have gotten funding from the African Development Bank, and we have some money also in our own provision. Also, IFAD, that is the International Fund for Agricultural Development, just donated or granted $5 million.”