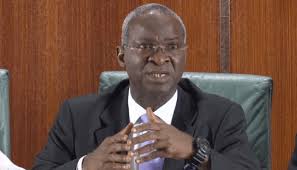 The Federal Government has said that it is owing highway contractors the sum of N10.4 trillion.

The Minister of Works and Housing, Mr. Babatunde, who made the revelation at a Budget Defence session with the House of Representatives Committee on Works in Abuja, also lamented that shortage of young engineers and technical officers due to the embargo placed on employment by the government was adversely affecting the Federal Ministry of Works and Housing.

He explained: “The shortage of younger engineers/technical officers in the ministry as a result of embargo on employment is affecting proficient project supervision at the sites. It is expected that more sources of funding of highway projects be explored as well as lifting the embargo on employment of needed engineers/technical officers at middle level to enhance supervision of projects.”

Speaking further, he said “the main challenge to highways development in the country remains inadequate funding. As at date, the government is committed to highway contractors to the tune of about N10.4trillion while a total of about N765billion are unpaid certificates for executed works.”

He noted that, “As at October 2022, the Ministry had a cumulative unpaid certificate in the sum of N765,017,139,752.92 for ongoing highway and bridge projects. Apart from the pressure of resources to pay, there is the inadequacy of annual budget provisions where N100 million or N200 million was provided for roads costing N20 billion or more.

According to the former Lagos state governor, “the ministry is currently undertaking a total of 1,642 highway contracts at a total contract sum of N10,395,294,937,624.20 spread over the six geo-political zones explaining that the 1,642 ongoing contracts are categorised according to special funding mechanisms.

Furthermore, he told the lawmakers that, “the NNPC joined the Road Infrastructure Development & Refurbishment Tax Credit Scheme programme by undertaking to finance 21 roads in the total sum of N621 billion with a total length of 1,804.6km. These roads were identified by key stakeholders such as the NNPC, Petroleum Tanker Drivers Association (PTDA) and the ministry, etc as being crucial for the efficient distribution of petroleum products across the nation.

Fashola, however added that for 2023, attention would be paid to ongoing road projects that are on the nation’s major arterials but not having any alternative source of funding apart from the budget. These he said included the llorin -Kabba -Obajana road, Okene -Itobe road and dualisation of Ibadan (May Fair Junction)-Lagere-Iremo-Erinwu-Ilesha road.

“The completion of ongoing highway bridges has been prioritised in the 2023 budget, particularly the Murtala Mohammed Bridge, Nupeku Bridge, Marine Bridge and Eko Bridge.”