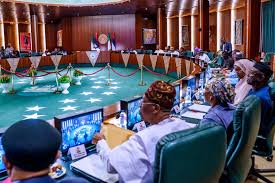 The Federal Executive Council (FEC) has approved a total of N29,083,577,000 for projects in two ministries including Works and Housing, and Mines and Steel Development.

This was part of the outcomes of the council meeting presided over by President Muhammadu Buhari at the Presidential Villa, Abuja on Wednesday.

Minister of Information and Culture, Alhaji Lai Mohammed, who disclosed this while briefing correspondents at the end of the meeting, said N27,233,577,000 billion was approved for the rehabilitation of the 30Km Idoani-Otuo Road.

He stated: “This is on behalf of the Honourable Minister of Works and Housing, who presented a memo for the approval of the award of contract for the rehabilitation of the 30-kilometre Idoani-Otuo Road, which links Ondo and Edo states and close to Kogi State.

The council also approved a N1.85 billion contract for the construction of about 27 kilometres of retaining wall to contain the loss of raw salt from the salt lakes in Ebonyi State.

Speaking on this, the Minister of Mines and Steel Development, Olamilekan Adegbite, said the project, which is being funded directly by the Presidency, will not only save the country millions of dollars in foreign exchange but also substantially close the local salt demand gap.

He explained: “We came to council for approval, there’s an intervention, direct intervention by the President, for a salt project in Ebonyi State. We import our salts from abroad, spending annually, something in the region of about $88 million. Now by this project, it will mitigate that, it will not satisfy local demand, but at least meet some of the local demand and save us the Forex.