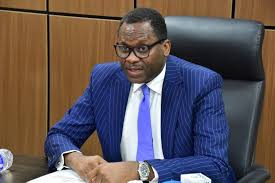 He lamented that  the level of hardship imposed on consumers via the economic crisis bedeviling the nation, saying “things have not been easy for Nigerians.”

The FCCPC Executive Vice Chairman (EVC), Babatunde Irukera, who stated this during an interactive session with journalists in Abuja, on Tuesday, said the first quarter of 2022 had been so intense for the commission.

According to him, many individuals and organisations are currently being prosecuted by the commission for different offences bordering on consumers’ rights.

The FCCPC Vice Chairman lamented that the effect of Covid-19 which halted economic activities in 2020 and 2021 coupled with the ongoing Russia and Ukraine war, has made life unbearable for consumers as prices of food items and other products continue to soar in the market.

When asked what the commission was doing to ensure fair prices of products in the market, Babatunde explained that the FCCPC was not saddled with the responsibility of regulating prices.

He, however, noted that the commission is working towards ensuring healthy competition in the market which would in turn affect the prices of products positively.

He said, “How can you be billing people who you have not given light for a while?

“We are working towards making estimated billing unattractive for Discos to enable them to see reasons to make prepaid meters available for consumers”.