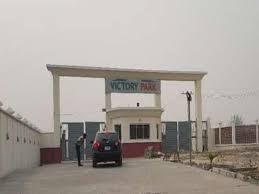 Following the reported seizure of some plots of land at Victory Park Estate in Lekki, Lagos State, by the Assets Management Corporation of Nigeria (AMCON), the estate owners’ association has called on the federal government to review the corporation’s conduct.

The association alleged that AMCON violated court orders when it sold some plots of land within the estate.

Speaking to journalists at a media briefing organised by the Association of Victory Park Estate Bare-land Owners in Lagos yesterday, the Managing Partner of Pistis Partners law firm, Mayowa Owolabi, who represented some of the affected members of the association, claimed that the association acquired several plots of land within the estate from a company called Knight Rook Limited through an affiliated company called Grant Properties Limited in 2002.

According to him, “Upon acquiring the land, his clients proceeded to register the title deeds at the land registry, paid all registrations fees and statutory charges and procured the consent of the Lagos State governor.”

He stated that in 2017, one Mr. Lanre Olaoluwa placed a signage on the perimeter fence around the estate indicating that AMCON was entitled to take possession of some plots of land within the estate based on the orders of the Federal High Court issued on June 16, 2016, in suit No: FHC/AB/CS/69/2016 – AMCON v Havilah Villas Limited and 10 Ors, and suit No: FHC/L/CS/744/2017- AMCON v Knight Rook Limited and 5 Ors.

He further explained that following an investigation, the affected members of the association discovered that the said Olaoluwa was purportedly appointed by AMCON as the Receiver/Manager of Knight Rook Limited and Grant Properties Limited “to take over both companies and their assets due to their indebtedness to some banks, as the debts had been assigned to AMCON.”

Owolabi added: “However, on further investigations conducted by our members, the referenced judgment did not give ownership of the respective plots of land to AMCON.

He said: “The said judgment stated that one hectare was to be seized, and not 49 hectares (all the plots of land) within the estate.”

The lawyer said members of the association (about 100 affected persons) filed several suits since 2016, and that the cases are still pending before the High Court of Lagos State.

He alleged: “But we discovered that notwithstanding the pending suits, someone (thought to be of AMCON) continues to sell the disputed plots, and is actively encouraging the persons he purportedly sold the plots to carry out construction work on the plots.” This Day