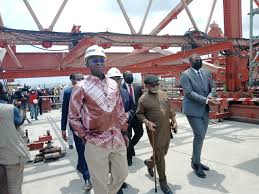 After years of delay, the Federal Government has revealed that the construction of the 2nd Niger bridge is now completed .

Speaking during an ongoing press briefing in Abuja, the Minister for Works and Housing, Babatunde Fashola said that the strategic road would soon be released to the public.

He added that it has nit been commissioned due to the construction of the link road which the recent flooding has impeded.

He said, “I can confirm that the second Niger bridge itself is finished. People can walk through the bridge now unimpeded. What remains is the four-kilometer link road on the Asaba side.

“Right now, our dredger is in place, we have to rebuild the road by reclaiming sand, the recent surge of flood has slowed us down. On the Onitsha side, there is a 7kilometer road that links the bridge and the Onitsha-Owerri interchange.”