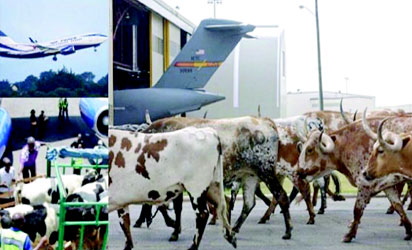 The Federal Airport Authority of Nigeria (FAAN) has said that it has commenced fencing of the Ilorin lnternational Airport.

This isvto curb cattle incursion at the Airport runway.

Ibrahim AbdulAzeez, the llorin International Airport Manager disclosed this in an interview with journalists in llorin on Monday

He said the measure was to prevent further incursion of unauthorised persons and animals into the airport perimeter and operational areas.

FAAN had organized a stakeholders meeting to curb incursion by cattle, encroachment and illegal mining activities around the Airport.

The iron fencing of the airport which began from the main entrance gate is serving as a substitute to the old fence, he said, adding that the fencing would be carried out in phases.

He revealed that the airport management would set up monitoring committee comprising all stakeholders to end all illegal activities at the Airport.

AbdulAzeez solicited the support and cooperation of stakeholders and residents within the vicinity of the Airport towards ensuring safety of facilities and passengers.