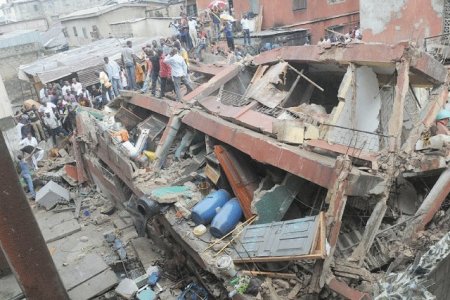 Its Chairman, Mr Adedotun Bamigbola, gave the advice in Lagos on Wednesday at the first press conference organised by the new executive committee of the institution.

Bamigbola said that urban regeneration would entail removal and demolition of the small apartments, shanties, bungalows, among others, that flooded the state to build “modernised structures that can accommodate more people.”

According to him, it is mostly old and distressed buildings that collapse. With the recurrence of building collapse, the need to embark on urban regeneration of the old buildings in the state becomes pertinent.

He said that urban regeneration would also involve complete upgrading of the slums and the entire environment, stressing that 70 per cent of the Lagos environment was still slums.

“The observation that most of the buildings that collapsed are distressed and old buildings speaks volume of the need for urban regeneration of the old buildings as well as regular infrastructure re-evaluation and re-development.

“A development plan is needed in this aspect of our state as the population growth is expected to double by 2050, making it the third most populous city in the world.

“The urban regeneration can be in the form of demolishing the shanties and old structures to construct modernised and high-rise structures that will accommodate more people.

“All that government needs do is to identify the renewable areas in the state and give it to the private sector to develop, having provided the enabling environment and facilities for smooth operation of the private operators,” he said.

Bamigbola said that his executive committee had a programme, tagged “The Agenda: The Future Is Now”, which encapsulated the plan of the administration to move the Chapter forward.

Mr Biodun Olapade, a Fellow of the Institution, said that the urban regeneration would pave way for maximum or optimal ultilisation of the limited land resources.

“With urban regeneration, land will be optimally ultilised to construct buildings that will habour more people because the shanties and illegal structures which occupy spaces will be demolished,” he said.

Olapade called for the ‘political will’ of the state government towards actualisation of the urban regeneration scheme as a proactive approach to tackle the menace of building collapse.

“A lot is therefore expected from the new government of the state as Lagos State must begin to compete with global cities and all steps to achieve this need to be put in place.

“We will continue to give the government our support as built-professionals and a key part of doing this is our quarterly real estate industry report which will address specific issues in the sector with data and advisory,” he said.