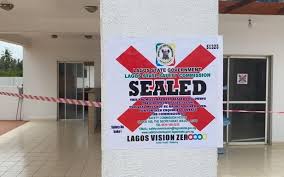 As part of its move to stem the tide of building collapse, the Lagos State Government has sealed off some properties at the Park View area of Ikoyi as well as some structures on the Lagos Mainland for violating contravening building control laws.

It should be noted that the state government has reiterated the need for Planning Permits and Project Boards to be present at every building construction site in the State.

The directive for the sealing of these properties was given by the Lagos State Commissioner for Physical Planning and Urban Development, Dr Idris Salako, in Lagos.

Several buildings under construction sealed were on Femi Pedro Road, Park View, Ikoyi and at different locations in Ebute-Metta and Makoko for various contraventions.

Salako said that it was mandatory for every construction site in Lagos State to produce the enabling Planning Permit on-demand, in addition to having the project board erected among other requirements.

He insisted that all buildings certified fit for habitation upon completion must have passed other requirements including Stage Supervision and Certification by the Lagos State Building Control Agency (LASBCA), adding that this position is to ensure that the building meets certain quality standards.

Salako said, “All these conditions are part of measures to ensure proper construction of the building and guide against collapse.’’