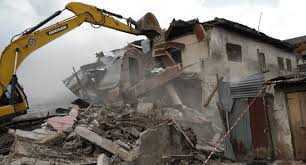 The Lagos State Building Control Agency (LASBCA), said at least seven buildings were demolished in the Mushin area of the state recently.

It also said the buildings were demolished to avoid imminent collapse that would have claimed several innocent lives and destroyed properties worth millions.

The seven distressed buildings located at Abiodun Wright Street, Itire Road, and Gbadamosi Iginla Street in Mushin, were pulled down by officials of LASBCA as a proactive step to save residents.

General Manager of LASBCA, Arc. Gbolahan Oki, expressed displeasure at the level of disregard for vacation notices issued by the agency on different occasions to occupants of the buildings and others in different parts of the state.

“The administration of Governor Babajide Olusola Sanwo-Olu frowns at the avoidable loss of lives and property of residents of the State, he said.

“It is time for Lagosians to take their safety seriously and avoid putting blame on government at all times”.

The Director and Head of Inspectorate, Quality Control and Post-Construction Audit, Engr. Khadijah Olayemi Aremo-Ajibade, who spoke on behalf of the general manager, stated that the seven buildings pulled down by the agency had been served necessary notices without compliance by the occupants and owners of the structures.

Arc. Oki assured Lagosians that the agency would relentlessly continue to pursue its vision and goal of ensuring that all buildings across the state were fit for habitation and constituted no risk to other nearby structures.

He expressed hope that Lagosians would, henceforth, cultivate the habit of vacating distressed buildings even before they were marked by Lagos State Building Control Agency or any other relevant government agencies for demolition.