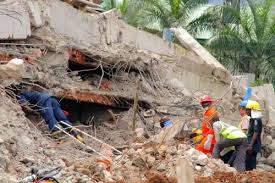 The President of BCPG, Mr George Akinola, made the call while speaking with newsmen in Lagos.

Akinola said that without proper security of distressed buildings, people would continue to live in them and become casualties in the event of collapse.

According to him, more than 1,000 buildings in Lagos State have been identified as distressed and marked for demolition by the Lagos State Building Control Agency (LASBCA).

Eight people were injured on Sunday when a distressed storey building, already marked for demolition, collapsed in Lagos State.

The distressed building was located at No 35, Adesanya Street, off Ayoni Bus stop in the Mafoluku area of Oshodi.

The collapsed building was undergoing illegal renovation by the owner after it had been abandoned for about seven years.

He said the building monitoring agency should  have sealed or demolished the building since it had been identified as distressed and marked for demolition, thereby preventing people from living in it.

“Since it has been observed that most of the buildings that collapse are distressed ones, it becomes pertinent that the government puts security at all identified distressed buildings to prevent people from inhabiting them.

“To demolish building requires scientific procedures and lots of resources. The government may not have the resources to demolish all distressed buildings at once, but let the buildings be properly secured against people entering them, so that if they collapse, no casualty or death will be recorded,’’ Akinola said.

He appealed to Lagos residents to report cases of abandoned and substandard buildings to the regulatory/monitoring agencies.

“Residents have vital roles to play in curbing building collapse; they are in a better position to detect early, illegal, abandoned and substandard constructions.

“LASBCA and other building regulatory authorities alone cannot properly monitor to detect when buildings are defective or when illegal constructions are going on, without the support of residents.

“It is the residents who are in better position to detect abandoned and substandard buildings in their areas.

“It requires collective efforts to end building collapse; residents need to contribute their quotas,’’ he added.