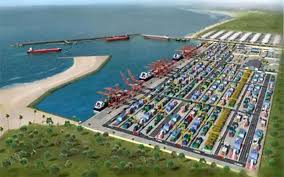 President Muhammadu Buhari will today visit Lagos State for the commencement of his two-day working visit to the state.

On arrival, he will be accompanied to the Lekki Deep Sea Port by host Governor Babajide Sanwo-Olu for the inauguration of the largest Sea Port in Sub-Saharan Africa. He will thereafter, inaugurate the newly constructed 18.75-kilometre six-lane rigid-pavement Eleko Junction to Epe Expressway and the 32-metric tons per-hour Lagos Rice Mill in Imota.

Tomorrow, the President will inaugurate the MRS Lubricant factory in Apapa and the John Randle Centre for Yoruba Culture and History and Phase 1 of the Lagos Blue Line Rail Project in Marina. He will also witness the signing of the second phase of the rail project from Mile 2 to Okokomaiko.

“Ahead of the President’s commissioning of @LekkiPort for commercial operations tomorrow, one of the largest container vessels, the CMA-CGM, has berthed at the port,” the NPA wrote on its Twitter handle @NigerianPorts.

The campaign timetable at the weekend by the APC Presidential Campaign Council (PCC) also showed that the standard bearer, Asiwaju Bola Tinubu, and his running mate, Kashim Shettima, will continue the other legs of the rallies for this week in Abia, Ogun, Benue, Taraba states as well as Abuja.

The Abia rally will hold tomorrow while that of Ogun will be on Wednesday. On Thursday, they will move to Benue and Taraba States. The Benue rally will hold at 10 am and that of Taraba by 2.30 pm.

The campaign train is scheduled to move to Abuja on Friday for the launch of the All Farmers Progressives Association and the inauguration of tractors for members by Shettima.

On the same day, Shettima will hold a town hall meeting with the Livestock Development Group.

Zamfara State will host the last rally of the week on Saturday in Gusau, the state capital.