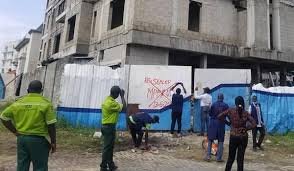 Henceforth, the Lagos State Government government has ordered that the building of a filling station be stopped.The station is situated at No.1 Robinson Gbagi/Benson Anoruo Street, Ajao Estate, Isolo.

Commissioner for Physical Planning and Urban Development Dr. Idris Salako said that the facility was being erected without any approval or stage-by-stage inspection by the Lagos State Building Control Agency (LASBCA) to ascertain the quality of materials used.

Hee said: “As a matter of fact, we cannot even be talking about checking for compliance against approval that was never given in the first place and this is dangerous for the built environment as the safety and structural integrity of the facility cannot be guaranteed.’’

The unapproved construction has become a growing concern for residents of the area, who have petitioned the government against its continuation.

Reiterating the importance of building right, the Commissioner emphasised that no construction should be carried out in the state without planning permits and stage certification.

He said the owner/developer of the filling station would be brought to book for ignoring warnings by LASBCA, which served contravention notices and stop-work orders on the builder.residents, particularly actors in the built environment, to “build right and team up with the state in her efforts to combat building collapse and vouchsafe a livable and sustainable physical environment as enshrined in the THEMES Agenda of the Lagos State Government”.