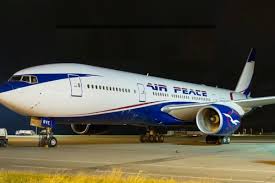 The Nigerian carrier, Air Peace, has advocated for  more synergy between the Nigerian Civil Aviation Authority (NCAA) and the Accident Investigation Bureau (AIB) to enhance air safety in Nigeria.

Capt. Victor Egonu, the Chief Pilot, Air Peace, made the call while speaking with newsmen on Thursday in Ikeja.

Egonu said the call was necessitated by the AIB allegation that Air Peace had failed to report an incident involving one of its aircraft on May 15 to the bureau.

The chief pilot said the airline had reported the same incident to the NCAA.

He said: “The claim by AIB that we concealed the hard landing incident involving our Boeing 737-300 aircraft with registration number 5N – BUK at the Lagos Airport is inaccurate.

“We informed the NCAA and also filed
a Mandatory Occurrence Report (MOR) which was duly received by the NCAA on May 17.

“Since we had informed NCAA, which is the regulatory agency, we felt that all the agencies are working together toward the same goal of safety.

“Air Peace strongly believe that NCAA and AIB should work together to enhance air safety in the country, and not be in any competition between themselves.

Egonu said Air Peace also wrote to Boeing and the manufacturer of the aircraft’s engine and CPM International.
The chief pilot said the organisation was awaiting response to be able to carry out the needed repairs before it was cleared for flying by the authorities.

He also disclosed that the airline was cooperating with the AIB in the investigation of the June 22 incident involving its aircraft that overshot the runway while touching down at the Port Harcourt Airport.

According to him, the Flight Data Recorder (FDR) of the B737-500 aircraft has been released to the bureau for analysis in order to unravel the cause of the incident.

Egonu said while not attempting to preempt the AIB investigation, the airline’s preliminary investigation revealed that it was due to “aquaplaning”, a condition involving an aircraft landing on a very wet surface.

According to him, the runway at the airport was flooded due to downpour which caused the aircraft to skid off but fortunately there was no casualty.

The chief pilot said Air Peace remains committed to the training and retraining of its 136 pilots to ensure their safety and that of the airline’s esteemed guests.

“If any airline have an incident in Nigeria, it affects everybody especially the confidence of passengers on our airlines.

“So, we don’t take anything for granted because Air Peace is a safety conscious airline,” he added