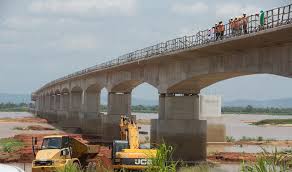 President, Muhammadu Buhari says that the 11.9km Second Niger Bridge and the 120 km Lagos-Ibadan Expressway will be completed before his regime ends in 2023.

Buhari also assured that other key projects under the Presidential Infrastructure Development Fund will be completed in the same period.

The President gave the assurance on Monday at the opening of a two-day Mid-Term Ministerial Performance Review Retreat organised to assess progress made towards the achievement of the nine key priorities of his regime.

‘You’re not forgotten’, Akintoye tells Igboho as Yoruba Nation agitator clocks 49 in Cotonou prison
At the event, Buhari highlighted some of the notable achievements of the Federal Government in the last two years, mostly in areas of infrastructure, transportation, economy, electricity supply, the petroleum industry, among others.

‘‘On transportation, we are growing the stock and quality of our road, rail, air and water transport infrastructure.

‘‘The PIDF projects are also advancing remarkably. These include the 11.9km Second Niger Bridge, 120 km Lagos-Ibadan Expressway, 375 km Abuja – Kaduna – Zaria – Kano Expressway and the East-West Road. Most of these projects are expected to be completed within this 2nd term of our Administration,’’ he was quoted by the Special Adviser to the President on Media and Publicity, Femi Adesina.