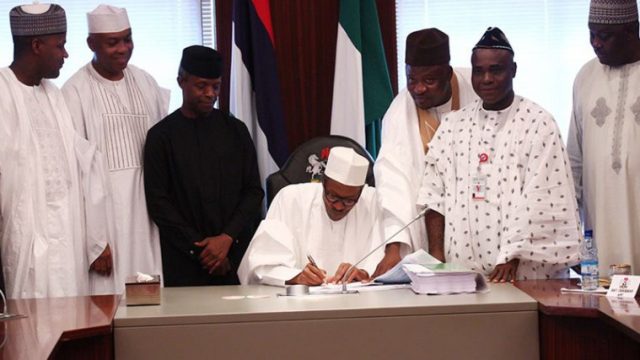 A Professor of Political Economy, Ufo Okeke-Uzodike, has advised Muhammadu Buhari, the President of Nigeria to complete all ongoing landmark projects to enhance economic development.

Okeke-Uzodike gave the advice in an interview with journalists in Enugu on Wednesday.

“The President should start to implement and complete landmark projects like the 2nd Niger Bridge, Resuscitation of the Ajaokuta Steel Company, major truck A roads projects, including the Enugu-Onitsha and Enugu-Port Harcourt Roads.

“It is on this landmark projects that the people will assess the performance of the Government after four years,’’ he said.

On the 2018 budget, he urged the Federal Government to concentrate more on implementation of the capital projects to stimulate the economy.

The 2018 budget was signed by President Muhammadu Buhari on June 20, after it was raised from N8.61 trillion to N9.12 trillion by the National Assembly.

Okeke-Uzodike, the Executive Director of Afri-Heritage, said the Federal Government needed to “work fast and smart’’ in its implementation by prioritising projects that would create jobs and stimulate the economy.

He said that youth unemployment was presently taking an alarming dimension thus, resulting in some recent socio-economic unwanted challenges.

The political economist also urged the Federal Government to focus on agriculture and industrial growth to create massive jobs for the people, especially for the young ones and graduates.

“Notwithstanding the late passage of the budget, moving forward, the Federal Government needed to prioritise its implementation since we have less time to the end of the year.

“The Government needs to focus more on agriculture and  manufacturing projects that will stimulate the economy  as well as put more money and food on the tables of Nigerians,’’ he said.