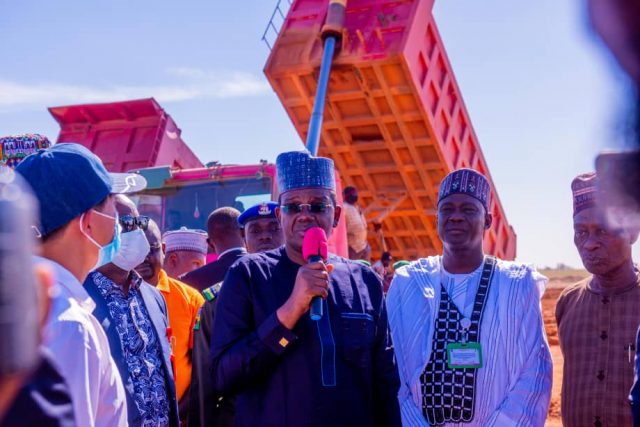 Governor Bello Matawalle on Wednesday embarked on the assessment tour of the ongoing construction work at the Zamfara state international Cargo Airport and directed the take-off of operations by June next year.

Matawalle who expressed satisfaction with the progress of work at the site assured that Aircraft will commence take-up by the middle of next year.

He directed the company handling the project to ensure that runway, all terminal sections commence operations before June next year, hoping that all Airport facilities and equipment will be on ground before the stipulated time, The Nation reports.

He said the state government will construct a befitting modern Hajj camp and pilgrims accommodation close to the Airport so that intending pilgrims of the state and neighboring states will be accommodated while waiting for their take off time to Saudi Arabia.

Earlier, the state Commissioner of Works and Transport, Engineer Ibrahim Isah Mayana and the project site Engineer briefed the Governor on the progress of work at the site.

The Commissioner who took the Governor round said work is going on based on the guidelines and the contractual agreement, assuring to beat time.

Similarly, the Governor visited Zamfara state Skills Acquisition Centre where he inspected the modern training facilities provided for entrepreneurship training for males and females, in order to provide job opportunities for the teeming unemployed youths in the state.

He said all skills acquisition centres across the state would soon resume operations after eight years of redundancy.

The Governor urged the management of the centre to ensure proper utilisation of training facilities provided by his Administration.