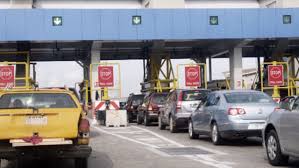 Two lawmakers in Lagos State have lauded the Federal Government over its plan to re-introduce toll gates on the highways across the country, saying nothing is wrong in the plan.

Rep. Kolawole Taiwo, member of the House of Representatives, representing Ajeromi/Ifelodun Federal Constituency, and a member of the Lagos State House of Assembly, Mr Bisi Yusuf, along with others, made the assertions on Friday in Lagos.

They spoke in separate interviews with newsmen on the proposed plan by the Federal Government to reintroduce tolls plazas.

The Minister of Works and Housing, Mr Babatunde Fashola, had on Wednesday said that the Federal Government was working on modalities to reintroduce toll plazas on the nation’s highways.

The government`s plan had generated mixed reactions among Nigerians with some lauding the idea, while others described it as insensitive.

Taiwo said the idea of reintroducing toll plazas was a good attempt to ensure proper maintenance of roads across the country.

‘’Tolling a road will make it easy for rehabilitation; it will remove the maintenance commitment from the bureaucracy of service, because the money realised must be dedicated for the maintenance and improvement of the roads.

“When a road is tolled, there are alternative routes; the difference is just the travel hours. So, tolling is not really a bad idea.

“There are toll plazas in developed countries and the purpose is to improve infrastructure,“ he said.

The parliamentarian said the country was faced with infrastructure deficit, which requires innovative interventions to address.

He urged the government to ensure that the erection of new toll gates was strictly to fund the maintenance of roads and not to extort Nigerians.

Also, Yusuf said  that the reintroduction of toll gates would ensure that tolled roads were properly maintained.

Yusuf, representing Alimosho I State Constituency, said tolling was being used in developed countries to keep their roads in good shape.

“To be honest with you, with my travelling experience, there are no developed countries that do not provide that kind of thing.

“It is now left to you, if you want to get to where you are going on time or to use the alternatives.

“It shouldn’t be a way of empowering some set of people or get food for them by exploiting the motorists.

“If those fees should be utilised for maintenance of the roads, I don’t see anything bad in it, once the road is motorable.

“If we see the kind of traffic we normally experienced on a daily basis, it is better we pay token and enjoy free movement than to waste hours on the road as a result of traffic,’’ he added.

Commenting, Chief Olayinka George, the Baale of Karaole, New Oko-Oba Abule-Egba, Lagos, said the tolls must be affordable so as not to impact negatively on the people.

“The fee must be affordable to avoid putting untold hardship on the masses.

“If it affects commercial vehicles negatively, it will also affect the passengers, thereby increasing the daily expenses of the people; the token must be used judiciously for road maintenance,’’ he said.

’’Bad roads have affected commercial activities within states across the country, but with this plan, many roads would be rehabilitated and such activities, will be enhanced,’’ he said.

Soetan said that the bad state of the economy was already taken its tolls on many Nigerians, adding reintroduction of toll gates would increase hardships.

“Before government can do such, people at the grassroots must be properly considered, because we will be at the receiving end.

“Cost of living nowadays is high; people find it difficult to pay rents, school fees and others.

“So, reintroduction of tolls will also increase the daily budget of individuals, because commercial vehicles will increase their fares,’’ she added.