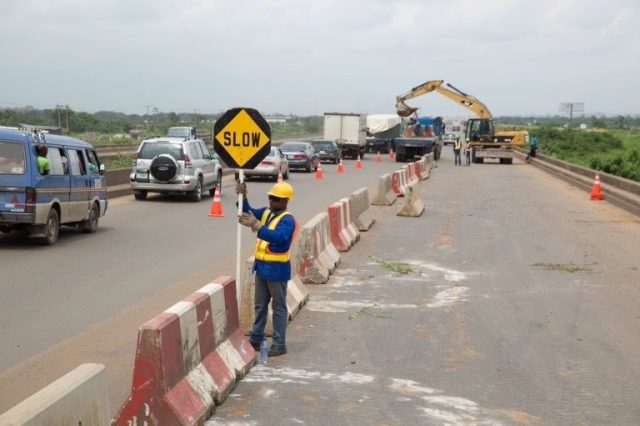 The Ayangbunrin of Ikorodu, Oba Kabiru Shotobi, on Wednesday advised Lagos and Ogun Governments not to erect toll-gate on the Ikorodu-Sagamu Road.

Shotobi made the appeal at the Ikorodu 1 Constituency Stakeholders’ Meeting in Ikorodu area of Lagos.

The meeting, an annual event of the Lagos State House of Assembly, was held simultaneously in the 40 state constituencies.

Gov. Dapo Abiodun of Ogun had disclosed that the two states were planning to commercialise three Federal roads: Ikorodu to Sagamu; Epe to Ijebu- Ode and the Lagos-Ota-Abeokuta Roads.

Abiodun had said that the states would engage the Public-Private Partnership in the construction and rehabilitation of the three roads.

Shotobi, represented by Ayodele Elesho, a former Lagos State Commissioner for Information and Strategy, said that erecting toll gates on the roads would inflict untold hardship on residents of the states.

“We pay our taxes, so governments should rehabilitate the roads and not introduce a move that would make life difficult for its people,” the monarch said.

He said virtually all roads in Ikorodu were in deplorable conditions, thus required urgent rehabilitation.

“Government should consider constructing a flyover bridge at Ogolonto Junction and another one at Ikorodu Roundabout to decongest the traffic situation,” Shotobi said.

The monarch also urged Lagos State Government to ensure that the waste evacuated by the operators and were properly and promptly disposed toward boosting hygiene and cleanliness in the state.

“If possible, government should return health inspection officers to check the sanitary conditions of residents and compliance to the environmental laws,” he said.

The Ayangbunrin of Ikorodu also said that the canals and drainage channels should be cleared to allow free flow of water, especially during rainy season.

Also, Oba Bashir Shotonwa, the Sekunmade of Ipakodo, urged residents to desist from urinating in public and stop defacing walls with posters.

“Most of the items blocking the drainages are plastics, we can recycle and convert them to wealth,” Adesanya said.

He said that government should check activities of industries along Odogunyan Industrial Estate, adding that they were causing air pollution in the area.

“Most times during their production, the atmosphere becomes darkened and this constitutes health hazards for residents,” he said.

Responding, Sanai Agunbiade, representing Ikorodu 1 Constituency in the Lagos State House of Assembly, said the state government was working on how to make life better for residents of the state.

Agunbiade said rehabilitation of some roads in Ikorodu had commenced, adding that all canals in Ikorodu would be desilted.