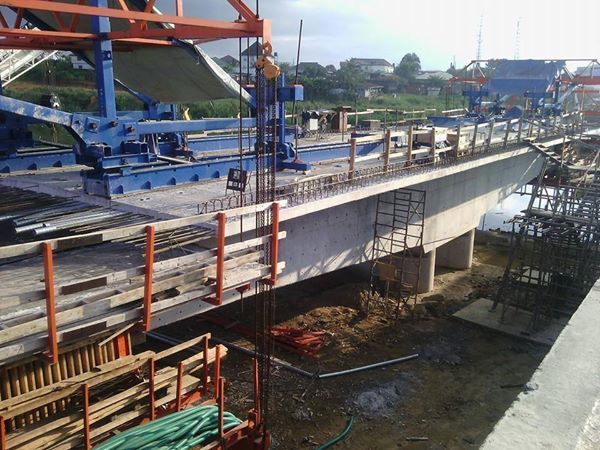 The Federal Controller of Works in Anambra, Mr Adeyemo Ajani, says that the second Niger Bridge may be redesigned to prevent suicide attempts.

Ajani stated this when the Abuja branch of the Nigeria Society of Engineers (NSE) inspected the on-going works at the Ogbaru site of the project, near Onitsha.

He said he would take up the NSE recommendation with the appropriate authorities.

“What we have on the walk lane is our standard design but what the engineers are talking about is a kind of review.

“If we have to do abnormal design to take care of suicidal situations, it will require another design.

“There has been rapid progress on the project. The last time the minister and the vice-president came, it was 15 per cent level completion but today it is above 21per cent.

“When you look at it from the time the project started, we are now at 24 per cent completion.

“The main bridge has begun.; we have done all the piling and the structures above water level have been done considerably.

“At the Asaba end, we have raised the structure to the deck up to 80 per cent,” Ajani said.

During the inspection earlier, the NSE Abuja Chairman, Mr Chinasaokwu Okoli, recommended a suicide-proof design of the pedestrian walkway of the bridge to prevent cases of suicide.

Okoli recommended a standard walkway of 1.5m high to discourage anyone who might want to jump from the bridge into the river.

“We are 25 engineers from Abuja, here to see for ourselves the second Niger Bridge.

“The project is fully crafted and the work is being handled and supervised well.

“Our concerns are positive. All the places that could raise concerns have been properly tidied up.

“The only area we have concerned is the pedestrian walkway.

“There should also be an attachment at the end of the 1.5m so that even if one wants to climb, he will be discouraged,” the chairman, said.

Okoli advised the consultants and the contractors to go back and try to reflect the concern that suicide attempts might be considered on the bridge if not raised.

He commended President Mohammadu Buhari for embarking on the project and expressed satisfaction with the quality and progress of work at the site.