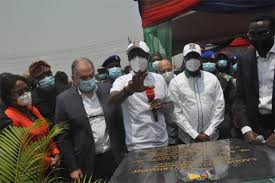 Speaking further, Sanwo-Olu expressed satisfaction over the junction improvement projects, stating that the official inauguration was deliberate to show Lagosians that his administration was committed to fulfilling the promises made on traffic management during the campaign and at the beginning of his tenure.

He further appealed to residents in Lekki and Abraham Adesanya to take control of the modest intervention to reduce traffic congestion, and to reach out to government on ways to improve provisions made to minimize travel time for commuters.

Speaking at the handover ceremony, the Commissioner for Transportation, Dr. Frederic Oladeinde, stated that the support of the governor had resulted in the successful completion of six major Junction/Roundabout Improvement Projects.

He added that Allen Avenue roundabout, Maryland junction and Ikotun roundabout, which underwent similar improvement, were already in use.

Oladeinde explained the pre-existing roundabouts could not cater to the rising volume of vehicles plying the routes during peak hours because it was limited to manual traffic control system which was inadequate considering the smart city vision inclusive of a 21st century technology-driven traffic control system needed for the fast growing population.

”Since the completion of these Junction/Roundabout Improvement projects, we have noticed significant improvement in traffic management along these corridors, commuters travel time is saved, while the usual traffic gridlocks have reduced considerably.” Oladeinde noted.

The Commissioner assured the governor that his ministry would continue to make efforts to realise the vision of making the state transport system a model for measuring efficiency in transportation not only in Nigeria, but the West Africa sub-region.

Delivering the Lekki 1st and 2nd Junction Improvement Projects, the Managing Director, Planet Projects Limited, Mr. Biodun Otunola, stated that drainage construction was a major part of the modification to prevent flooding which was responsible for the rapid deterioration of the asphalt

He also disclosed that 30 Traffic lights, 27 street lights, 10km road markings and over 100 traffic signs were installed to efficiently execute the junction improvement on the roundabouts.

The Permanent Secretary, Mr. Kamar Owodiran Olowoshago, reiterated that the Ministry of Transportation would do its best to ensure that there is an improvement in traffic management which in turn would ensure safe travel time and a significant reduction in traffic induced stress for commuters.

He also assured that government policies and programmes will be implemented in the transport sector to create an enabling environment to attract Private sector participation in the ongoing Multi-Modal Transport System in line with international best standards, The Sun.