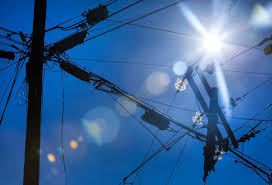 Scores of youths in Owode-Egba in Obafemi-Owode Local Government Area of Ogun State, on Monday, came out enmasse to protest six months power outage in the local government headquarters.

According to them, the main injection power transformer that supplies electricity to about 32 communities in the town got burnt since August, 2020, saying all their efforts to ensure the transformer is replaced by Ibadan Electricity Distribution Company (IBEDC) has failed to yield any positive result, The Sun reports.

The protesters, who also took their protest to the palace of the Olu of Owode-Egba, Oba Kolawole Aremi Sowemimo and the headquarters of Obafemi-Owode Local Government, blamed the electricity company for turning deaf ears to their pleas.

Speaking on behalf of the protesters, the president of the Owode-Egba Youth Development Movement, Abdul Fatai Shoneye, explained that since the community was thrown into darkness, IBEDC had not come out with any official position.

He added that businesses in the town have suffered, while criminals have been terrorising the community as result of the blackout.

Shoneye disclosed that the community had also visited the office of the IBEDC and Ministry of Chieftaincy and Local Government Affairs to call their attention to the situation, but nothing was done to address the situation.

“Since August 9, 2020, we have had a problem of transformer and up till date, there has been no official statement from anybody; either from the IBEDC or government. That’s why we are making it as a protest to let them know that people are living here and we are suffering from darkness.

“We want the government to come to our aid, because the IBEDC told has told us that this is beyond their power. The transformer is not just an ordinary transformer; it is 2.5MVA 33/11.

“We are appealing to the government and well-meaning people to come to our aid so that we will get our business on the track, because every business here has collapsed due to elongated power outage”.

Addresing the protesters, Oba Sowemimo bemoaned the power outage and appealed to the protesters be calm and go about their protest peacefully.

He said he had made personal efforts to ensure the damaged transformer was restored by engaging the officials of the electricity company, expressing disappointment the way the company was handling the matter.

Oba Sowemimo, however, called on the company to endeavour to replace the damaged transformer, saying criminal activities had been on the increase since the blackout.

Reacting to the protest, the Regional Communication Officer of the IBEDC, Ayodeji Bada, denied ignoring the demands of the community, adding “the management of is doing everything to ensure the replacement of the transformer”.

“The transformer is 2.5MVA bulk transformer. It was suppossed to be used for a mini injection station. The order to import a new one to replace the damaged one had been placed, but it will take a while before it get here. That’s why we are telling them that this is the situation of things; we are doing everything possible to ensure that the electricy supply is restored to Owode Egba and its environs”, Bada stated.