Home Roads Residents of Muwo in Lagos call for upgrading of infrastructure as flood... 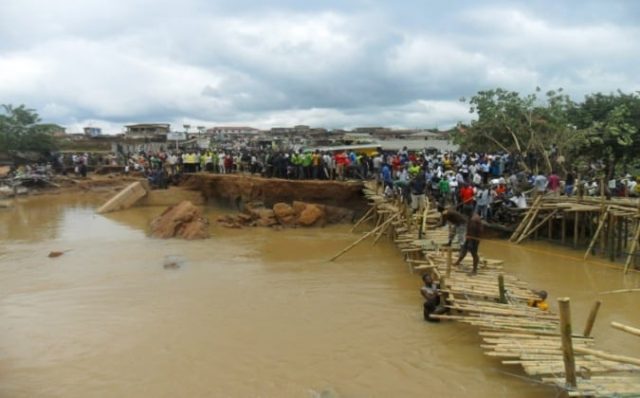 Some of the residents, who left their homes on the fishing island, could not go back to their homes as the only already dilapidated bridge to the place had been washed away.

Muwo community, a fishing settlement of about 2,000 inhabitants, is located along the fringes of the Lagos lagoon towards the Satellite Town opposite the Lagos International Trade Fair Complex.

The community, originally mapped out for fishermen, now play host to traders at the trade fair market.

Akin Idowu, a stranded resident of the area, said the flood which used to come mostly in the evening, started on Wednesday, submerging buildings in the area.

“We did not know that it will affect the rickety bridge, thereby making residents that left their homes in the morning to the upland not able to get back to their families.

“It is a pathetic situation and this would not have gotten to this extent, had the state authorities heeded to calls by the resident before now,” Idowu said.

Cheif Martins Adebowale, the traditional head of the area, said that the area had been witnessing an upsurge in population since the inception of the trade fair market in 2007.

“The area plays host to fun seekers during the festive period, especially those that want to enjoy the waterfront resorts located in the area.

“The upsurge has led to more pressure on the available facilities in the area,” he said

He said it was regrettable that the authorities allowed the place to rot without corresponding infrastructure.

He called on the state government to assist the area since it was still part of the state.