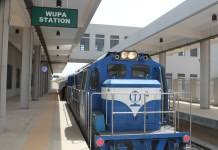 The Federal Capital Territory (FCT) Minister, Muhammad Bello has directed relevant FCTA agencies to clear all illegal settlements and structures obstructing the FCT railway corridor and station access ways.
Bello said this during a test ride of the train service and inspection tour of the rail stations in preparation to the opening of test run to the public in Abuja.
The minister with the Federal Capital Development Authority (FCDA) staff was led on the inspection by officials of CCECC Nigeria Limited – the rail construction company.
He also directed FCDA to speed up works on the opening of access roads to the 12 railway stations.
According to Bello, this was to make it possible for passengers to gain access to the train services which, he indicated, would start in a few weeks’ time.
The test ride took the minister and his entourage round the 12 railway stations spread across the scenic landscape of the rail network.
In the course of the inspection, the view gave the riders an exciting preview of what commuters expected to have upon the commencement of the train services.
At the end of the inspection, the minister expressed satisfaction with the quality of work done in the railway project, commending the contracting firm and consultants for a good job.
“Thank you very much for an excellent delivery, we are very satisfied with the quality of works that has been done.
“What remains now is to recover the railway boundaries, clear the corridors and provide access ways to the stations. This we hope will be done in the next few weeks to enable us commence the test services.
“We hope to open the stations for operations in the next few weeks and we don’t want a situation where the train would be competing for space with illegal structures and settlements,” he said.