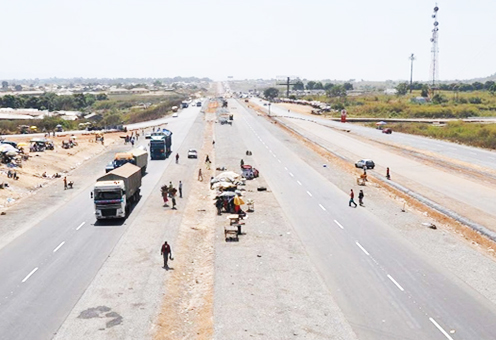 Mr Funsho Adebiyi, Director, Highways, Southwest, Federal Ministry of Works and Housing, has disclosed that government is committed to speedy completion of Oyo- Ogbomoso road and other ongoing road projects in the South-West zone.

Adebiyi said this on Saturday in Ogbomoso while addressing newsmen after an inspection tour of the 53-kilometre Oyo-Ogbomoso dual carriageway, which is under construction.

The road is second section of Ibadan-Ilorin road and a subsection of a major trunk A1 road which originated from Apapa Wharf in Lagos and terminate at Sokoto state.

NAN also reports that the construction of the road is being handled by Reynolds Construction Company (RCC).

The highway director noted that the volume of traffic and the axle loads on Nigerian road pavement were by far beyond the capacity of most of the roads.

This, he said, was due to the fact that the country basically depended on the roads as the major means of transportation.

Adebiyi said that this had over-stretched the roads, thereby forcing government to start addressing the challenges by increasing the bearing strength on the road pavement, the volume of thickness of the roads and other works.

He added that this had led to increase in the cost of road construction in the country.

Adebiyi said that the work done so far on the Oyo-Ogbomoso road was of high quality and could stand the test of time, adding that RCC was making steady progress, with the work reaching about 50 percent completion stage.

He, however, decried the sand mining activities on the road alignment by some residents of Ogbomoso, saying these had been making earth-work difficult in the road construction.

”What we could have used as earth-work have been mined off and we were forced to bring in materials from another borrowed pit to fill the already mined alignment; so the cost of haulage is increasing the cost of our construction work,” he said.

He also disclosed that two construction workers were knocked down and killed by fast-moving vehicles on the road pavement, while four others were wounded when some unknown persons tampered with one of the bridges under construction.

”So with the schedule of work programme on ground, hopefully by the end of 2020 and early 2021, it should be completed.”

Speaking on the recent approval by the Federal Executive Council for the construction of Ibadan -Ife-Ilesha -Akure road, Adebiyi said that massive construction work on the road would soon start.

The director said that motorists might have experience some discomfort when the construction work eventually began, as some sections might be blocked and diversion arranged.

Refuting insinuation that the Federal government was paying more attention to roads to the Northern zone than the South, Adebiyi said every geopolitical zone was benefitting equally from government road projects across the country.

”Road projects are spread out in such a way that no zone is left behind, as the Sukuk bond and other funds made available for road projects were shared equally among the six geopolitical zones.

”What make it look as if government is constructing more roads in the states in the Northern Nigeria is because of the difference in topography, soil condition and other things between the North and the South.

Mr Yuri Visman, the Project Manager, RCC, promised that the company would deliver quality job on the Oyo-Ogbomoso road when completed, but urged government to provide adequate funding.