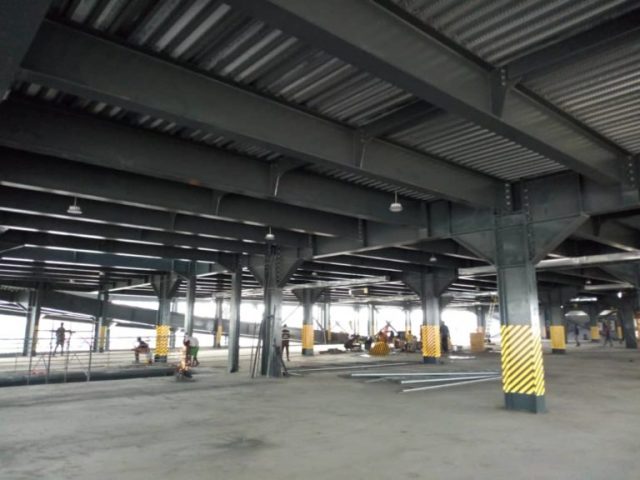 Planet Project Ltd., the contractor handling the Oshodi Transport Interchange of the Lagos State Government, says terminal three of the facility will become functional from May 2.

Mr Biodun Otunola, the company’s Chief Executive Officer, disclosed this while conducting newsmen round the project on Tuesday in Lagos.

Otunola said that President Muhammadu Buhari is expected to commission the project on Wednesday.

He said that work was still ongoing at terminals one and two of the project, adding that when completed, the interchange is expected to process about three million passengers per day.

“Terminal three is ready and will kick off operations on May 2 after the commissioning on Wednesday. From what we have on ground, you can see that the terminal can take 4,000 persons at once.

“About nine million people use transport in Lagos State daily.

“What we have done is to create a state-of-the-art terminal that will ensure security, encourage passengers to shop as they are travelling and make them as comfortable as possible with easy to access ticketing system.

“We have CCTV everywhere to help with security, the entire waiting area is fully air-conditioned and with this development, there will be value added to the state,” he said.

“ The Oshodi project will also make provision for a mega shopping mall to be built through a Public-Private Partnership (PPP) agreement at the third terminal. The three terminals will serve 1,000 modern buses. The terminals will also have 1,000 light effects to project the aesthetics of the ambience.

“On completion of the project, Oshodi will be a beautiful zone. It will have the toga of ‘if you don’t spend a night in Oshodi, you have not visited Lagos State,’ It will be an iconic area where people will want to take pictures. This place will be tourism-driven.

“Oshodi had been a no-go area. Over 30 parks are here and these will be put into 13 parks. The entry and exit points will be modernised and this will bring sanity and orderliness to Oshodi. The buses are ready for the first take off in terminal three,” Otunola added.

Hundreds of workers were seen putting finishing touches to the terminal three ahead of its commissioning on Wednesday.