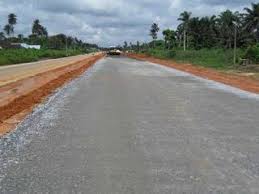 Youths from the four Ogoni-speaking Local Government Areas of Rivers State on Monday morning blocked the Eleme-Onne axis of the East-West road to protest the poor condition of the federal highway.

The youths mobilised trucks which they used to block both ends leading to the nation’s critical infrastructures especially the only bridge connecting the area to Port Harcourt.

The section, measuring 15 kilometres with a connecting bridge is one of the busiest segments of the Federal highway following the regular hauling of goods from the Onne seaport, the Port Harcourt Refining Company, the Oil and Gas Free Trade Zone, among others.

The protesters who blocked the road with heavy-duty trucks for several hours demanded that the dilapidated Ogoni section of the East-West road be reconstructed, with at least three flyovers at strategic locations in Akpajo, Alesa and Onne, all in Eleme Local Government Area.

They also want the existing bridge at Aleto junction to be remodeled.

Apart from the hauling of goods from Eleme, the East-West road with only an access bridge which is near collapsing connects nine local government areas to Port Harcourt, the Rivers State capital.

The Federal Government had promised several times to fix the section of the road, but contractors are yet to move to the site, even though skeletal works are ongoing on some sections of the East-West in Rivers State.

Meanwhile, the protest has affected businesses and other activities in the area.

Also, the physical verification of the Continuous Voter Registration exercise scheduled to commence in parts of Rivers State on Monday was affected by the protest.

In a statement, the Head, Voter Education and Publicity of INEC in Rivers State, Mark Usolor said “due to the blockade on the stretch of the East-West Road, their personnel and materials were unable to arrive some of the Local Government offices of INEC to commence the exercise.”

It, however, assured potential registrants in the affected local government areas that the exercise will commence in the areas as soon as the situation is put under control. Channels.