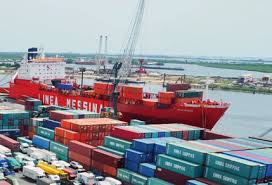 Lagos State Government has expressed readiness to partner the Nigerian Ports Authority(NPA) to enforce the electronic call-up system with  view to decongesting the port and ensure free flow of traffic around the Apapa axis of the state and environs.

The Governor of Lagos,  Babajide Sanwo-Olu made said this when Managing Director of NPA, Hadiza Bala-Usman, visited him at the Government House.

Acccording to Sanwo-Olu, the  electronic call-up system will stop trucks from  parking indiscriminately on the roads to avod gridlocks, adding that the trucks will  come to the port when it is time to load.

He added that the three-month trial on enforcement starts on Saturday.

Sanwo-Olu said: “There has been conversations around the call up system. It’s been a tedious and rigorous process, and we are happy it is taking off now. It will be a transparent system; there will be a virtual dashboard that people will see at the various stations.

”We are starting with eight holding bays in the first instance, and as numbers and investments improve, we hope the NPA will approve others.

“Our target is to take between 3,000 and 5,000 articulated trailers off the road. This will certainly be the beginning of better customer journey in the ports, and for people living around the port areas. It will be app based and so no one would have to interface with security agents or call at ungodly hours.

“You don’t have any business being on the road when it’s not your turn to load. There will be enough towing vehicles to tow your truck off the road. Defaulters will be fined to deter others so that people can understand the seriousness of this.

“There would also be regulations to ensure shipping firms have their own holding bays to park their trucks rather than park on the roads, cause gridlocks, and then have to pay demurrage on empty containers. Since they are not responsible for ensuring their trucks get into the port, they are not under pressure to beat time since their deposits will be refunded.

“This is the beginning of a strong collaboration between NPA, Lagos State, and the people. Our security officers should also ensure this project succeeds. We are beginning with a three-month trial and though there would be initial teething problems, we would smoothen the journey so that the trailers can get into the ports early enough. We will ensure these resolutions come to life; strengthen and support them to work.

Governor Sanwo-Olu recently constituted Special Traffic Management Enforcement Team, headed by his Special Adviser on Transportation, Oluwatoyin Fayinka, to resolve the incessant gridlock that has plagued the port and environs.

Responding, Bala-Usman stated that the NPA team was in the state to seek the government’s support for the E-call up platform

She said: “The E-Call up system will start on Saturday and we are here to strengthen collaboration with Lagos State on its implementation and enforcing compliance.

“We have worked seamlessly with Lagos to ensure that Apapa and Tincan ports are rid of the menace of trucks. It’s quite an embarrassment to all of us in government year in year out. But now we believe we have a strong E-Call up system that will remove human interference from the process.”

According to Bala-Usman, one key aspect of the new system is that truck parks have been approved where it is safe to access port location.

“Having identified these truck parks through public process, we have listed eight truck parks certified by Lagos State and NPA, that truckers having intention of doing business in the ports will park pending their e-call up.

“This will remove human interference and the idea of trucks being flown or flying into the ports at night, as well as all manner of extortion and allegations between NPA, Police and attendants. This will end through the transparent e-call up that will provide first come, first serve access into port locations’ ”

“One of the key aspects of strengthening collaboration with Lagos is compliance as we deploy implementation on Saturday. Any truck, which has not been called, but is found on access roads, will be impounded by the state, supported by the Federal Road Safety Commission (FRSC) and NPA security, and violators will pay huge fine before their truck will be released.

“This is the aspect of enforcement and compliance we are all anxious it succeeds. Truck owners have been briefed at extensive stakeholders’ consultation over the last two months. We have also had media engagements to explain procedures for utilising the call up system.

“Thus, any truck that is found in the corridors would be impounded and Lagos will provide the platform for payment before the owner gets it back.”