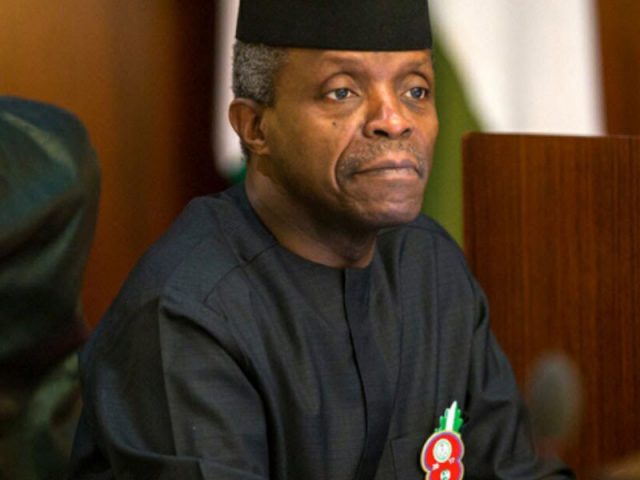 The Federal Government has stated that Nigeria needs mobilisation of domestic savings and foreign capital to finance the country’s needs in infrastructure, agriculture, housing SMEs and other services.

Prof. Yemi Osinbajo, Nigeria’s Vice President, who stated this in a keynote address delivered at the 2019 FMDQ Nigerian Capital Markets Conference in Lagos, said that Nigeria required more capital to grow, develop and attain its potential.

“We need to mobilise domestic savings and capital as well as attract the necessary foreign capital to finance our needs in the areas of infrastructure, agriculture, mining, industry, housing, SMEs, “he said.

Other sectors where he said such development was also needed include: information and communication technology, transportation and other services.”

He noted that an African Development Bank report on Nigeria’s Infrastructure Plan in 2013 estimated that Nigeria would need to invest about 350 billion dollars in 10 years to meet up with its peers.

The vice president said that the administration of President Muhammadu Buhari was doing everything possible to close the gap in infrastructure deficit.

He explained that this was being done through direct expenditure and also by incentives given to private investors, domestic and foreign to invest in the critical sectors of the economy.

“The Economic Recovery and Growth Plan (ERGP) (2017-2020) has a major objective of building a globally competitive economy through investment in infrastructure, improvement in business environment and promotion of digital-led growth.

“No doubt, this objective requires fresh and adequate capital.”

According to him, the need to attract capital is further underscored by the ERGP’s initiatives such as the promotion of innovation and technology-led industries, encouragement of private equity and venture capital players.

He stated that government had also issued green, infrastructure and diaspora bonds to sustain finance.

“Between February 2017 and November 2018, we have explored the international market to raise capital by issuing series of Eurobonds and a Diaspora bond in June, 2017.

“This approach to diversifying our sources of capital has assisted in making our country a destination of capital and further deepening our capital market.

“Private issuers are also encouraged to issue these instruments, leaning on the success recorded by the Federal government.

“The secondary markets of some of these instruments are also getting more liquid as observed on the Exchanges.”

He said that government had increased allocation to capital projects in annual budget to boost infrastructure development.

“For instance, we have been allocating, on the average, close to 30 per cent of our expenditure to capital projects.

Speaking on some of government’s plan for 2020, Osinbajo said that Federal government would sustain growth and ensure creation of more jobs in 2020 and conduct major reforms on Deep Offshore and Inland Basin Production Sharing Contract.

Osinbajo also said that government would leverage on the private sector funding for capital projects through tax credit schemes and as well modernise the national grid under the Presidential Power Initiative.

He said that the administration would issue more licenses to build modern terminals in ports and continue to engage in innovative borrowing, using Sukuk, Green Bonds and Diaspora Bonds.

“However, we recognise that government alone cannot muster and deploy enough resources that are necessary for Nigeria’s development, due to competing and rising needs as well as challenges in revenue sources and collection.”

Earlier in her opening address, Uduk said that the Capital Market Master Plan (2015-2025) was launched to transform the Nigerian capital market with a view to making it more competitive to enable it contribute its quota to developing the nation, through funds mobilisation.

She said that the plan was hinged on four strategic themes: Contribution to National Economy, Competitiveness, Market Structure and Regulation and Oversight.

Uduk said that SEC, in partnership with the market, had worked on initiatives that simplified the process of raising capital and reduced time to market in contributing to the national economy.

“The recent efforts toward developing the Nigerian commodities ecosystem and the Fintech space are also important contributions to the Nigerian economy.

“In order to enhance market competitiveness, the minimum capital requirements for capital market operators were raised and transaction costs reduced for equities and fixed income segment of the market,“ she said.

Other areas she said were “a robust complaint management framework introduced and various other initiatives being implemented to enhance liquidity. “

“Toward improving the market structure, minimum operating standards for all market operators have been implemented.

“Some of the ongoing initiatives; such as the e-dividend, multiple subscription, direct cash settlement and electronic distribution of companies’ annual reports are geared toward achieving an innovative market structure.”