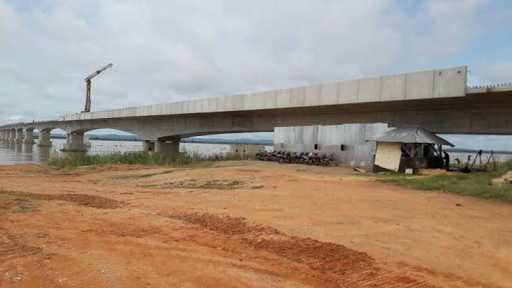 Bola Aganaba, the North-Central Deputy Director of Highways, Federal Ministry of Power, Works and Housing,  says the Loko-Oweto Bridge and its adjoining roads will be open for traffic in December.

Aganaba told journalists on Tuesday in Abuja that the contractors handling the Bridge and the adjoining roads were on ground to achieve the target.

The Bridge, spanning over two kilometers and connecting Loko in Narasarawa and Oweto in Benue states would be the longest in the entire northern part of the country when completed.

The Loko-Oweto Bridge will also ease congestion on Abuja-Lokoja road and reduce travel time by over three hours for travellers going to the East and some parts of South-South.

The Deputy Director said the contractors have pledged during a meeting with Mustapha Shehuri, the Minister of State, Federal Ministry of Power, Works and Housing, to make the road usable before December.

He said the meeting was called to get the contractors commitment to making the road functional because of the planned inauguration of Loko-Oweto Bridge in December.

Aganaba said the contractors had agreed to put in their best to ensure that the adjoining roads were made o functional before the inauguration of the Bridge.

He said it would be senseless for the Bridge to be inaugurated when the adjoining roads were not in place, adding that the return of the contactors to site was an indication that the target was achievable.

It would be recalled that Eyass Nassar, Loko-Oweto Bridge Project Manager, Reynolds Construction Company Ltd., had during media tour, pledged to complete the project in December as scheduled, if government sustained funding of the project.

He said the release of Sukuk fund had facilitated the execution of the project, adding that three out of the four bridges in the project had been completed.

Tony Onwubiko, the Ministry of Power, Works and Housing Supervisor, Loko-Oweto Bridge Project, expressed satisfaction with the quality of work.

He said the contractor had made remarkable progress in the project with the release of Sukuk fund by the Federal Government, adding that four bridges were involved in the project.

Onwubiko said the entire project was 83 per cent completed with three of the bridges completed and opened to construction traffic.

He said the project was commenced in 2012 but was delayed because of poor funding and some design adjustment.